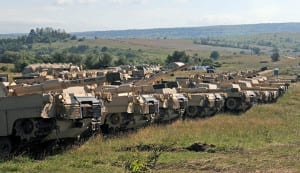 As the U.S. and its allies were preparing for war with Iraq in November of 1990, Marine Corps Lt. Gen. Ernest T. Cook Jr. observed, “Logistics is the hard part of fighting a war.”

Last fall, the Soldiers of the 116th Cavalry Brigade Combat Team (CBCT), Idaho Army National Guard were notified that they would be participating in Exercise Saber Guardian 2016 in Romania.

Led by U.S. Army Europe, Saber Guardian is designed to promote regional stability and security while strengthening partnership capacity, fostering trust and improving interoperability between Romania, the U.S., NATO and Partnership for Peace member nations. It will take place from July 27 through Aug. 7, 2016, at the Romanian Land Force Combat Training Center in Cincu, Romania.

“Once we were assigned the mission, we were all over it,” said Lt. Col. Jim Harper, executive officer, 116th CBCT. One of the first challenges the unit faced was figuring out how to transport nearly 500 tanks and other heavy equipment over two continents and an ocean.

“Typically when you deploy; you fall into equipment,” said Harper. “However, for this mission we are basically an expeditionary force, so we had to bring everything in.” 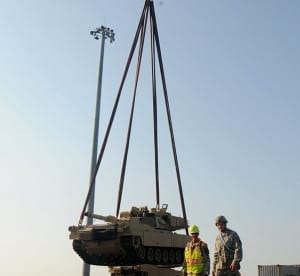 That task of bringing everything in was given to Chief Warrant Officer 2 Steven Howell, brigade mobility officer, 116th CBCT. His first challenge was transporting the equipment located in four states — Idaho, Montana, Oregon and Nevada — to two staging sites in Helena, Montana and Boise, Idaho.

For Harper, who had recently coordinated the movement of 1,450 pieces of equipment to Fort Irwin, Calif., for an National Training Center rotation, the challenges of shipping the equipment halfway across the world were daunting.

Howell said the equipment, which was staged at the two sites by mid-April, was then loaded onto railway cars bound for the Port of Charleston. “We loaded the equipment staged in Montana onto railroad cars on April 23 and the equipment in Idaho on May 9.”

The equipment left Charleston Harbor in early June and set sail for Romania. 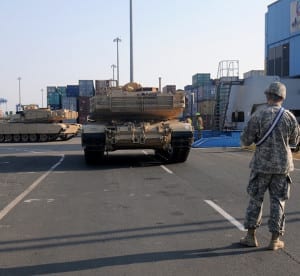 “Upon the vessel’s arrival in Constanta on 20 June we put into effect 24-hour operations with 52 soldiers,” said Howell. “Those soldiers were responsible for offloading all tracked vehicles, staging and preparing equipment for onward movement by rail or line haul. We were able to offload the vessel within 36 hours, which came as a surprise, as often the vessel offload is completed in 72 hours.”

During planning, the unit projected the movement of equipment from Constanta to Cincu would take about 30 days due to the constraints of the Romanian rail company they were working with. However, upon arrival, they discovered that it was not the case and they were able to move the equipment twice as fast.

“We were expecting to be able to send one to two cars a week to Cincu,” said Harper, but we were able to send eight cars in two weeks, which cut our time nearly in half.”