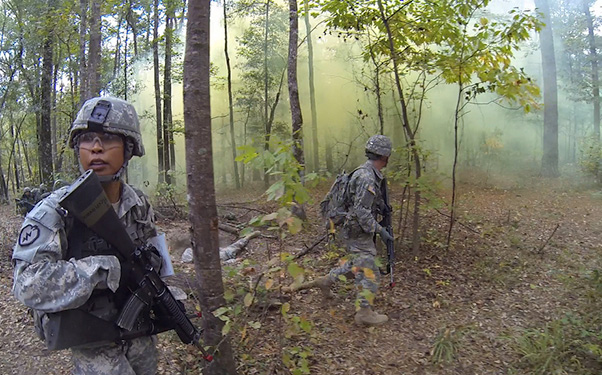 A recent change in eligibility now allows enlisted personnel up to age 33 to apply to become officers. Also, there’s no longer a requirement to serve in the Army for six years before going to Officer Candidate School.

The current guidance, which was published in 2015, about 10 months prior to the 75th anniversary of OCS, is contained in Military Personnel Message 15-270 “FY16 U.S. Army Federal OCS Program Announcement.”

“The resulting Army Readiness from OCS accessions is stronger today than it was even a decade ago,” said Jon Banco, chief of Human Resource’s Command’s Officer Accession Branch. “With a few adjustments to screening criteria and the requirement to hold a Baccalaureate Degree, we ensure a competitive environment for the new officer and a more diverse and stronger officer corps for our Army.”

Officers graduating this year will begin their commissioned careers on an equal academic footing as their U.S. Military Academy and ROTC counterparts, without the burden of having to enter a degree completion program before they become captains, as was the case in previous years, Banco said. All second lieutenants graduating from OCS entered training having already completed their baccalaureate degree.

The MILPER is being reviewed at Army G-1 and should be published within the next few weeks. 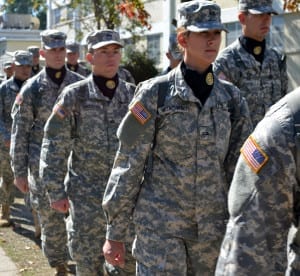 Delta Company Soldiers at Officer Candidate School march to the field to begin their missions, at Fort Benning, Ga.

Vacant seats
Capt. Jefferson Davis, assistant operations officer for OCS at Fort Benning, Ga., said he believes many more soldiers would apply to OCS if they learned more about the program and knew they were eligible.

Lt. Col. Mark Andres, OCS battalion commander at Benning, added that some Soldiers might not be aware of the changes in the MILPER guidance.

Banco said it’s important to review the MILPERs, as guidance can change based on the accessions mission and needs of the Army.

“Regardless of the size of the military, it is important to proportionally access new officers every year to meet the needs for captains and majors three to five years in the future,” said Denise Corley, chief, Officer Accessions Coordination Branch, Army G-1.

The annual end state regarding volume to screen or select is influenced by Army end strength and budget requirements or constraints, Corley explained. The 150 regular Army OCS mission was the right number for this year. Every person counts, especially now in the Army’s smaller footprint. There are, and there will be continuing opportunities to apply to be part of our future cohorts,” she said.

Eligibility requirements
Andres said soldiers who are 33 years old or less at the time the OCS accessions board meets, are eligible to apply. Soldiers also need a General Technical score of 110 or higher and must have a baccalaureate degree.

Any enlisted member of any service, not just the Army, may apply, Davis added.

A complete list of requirements and instructions for applying can be found by reading MILPER 15-270. Banco reiterated, however, to keep in mind that the new MILPER that replaces it will soon be published.

The new MILPER will serve as guidance for in-service active-duty and Reserve Soldiers only, Banco said. Civilians with college degrees interested in becoming active or Reserve officers may use the forthcoming MILPER as a “guide.” Civilians interested in Army National Guard service can see a Guard recruiter.

Program of instruction
Andres provided an overview of the course:

* Weeks 1 and 2: introduction, leadership, ethics
* Weeks 3 and 4: military history, competence in warrior task and battle drills confirmed by cadre
* Week 5: land navigation
* Weeks 6 and 7: squad-level tactical instruction
* Weeks 8 and half of week 9: squad-level evaluations on ability to lead squad through a tactical mission
* Half of week 9 and week 10: platoon level operations
* Weeks 11 and 12: mentorship aspect of what it means to become a junior officer, how officers interact with Soldiers and noncommissioned officers, Army civilians
* After week 12, there’s a commissioning ceremony

Andres said the U.S. Army Training and Doctrine Command oversees the training and ensures that the syllabus is appropriate for commissioning second lieutenants.

“G-1 provides policy oversight for all paths for appointment to the three Army components,” said Corley.

He added that OCS follows Army Regulation 350-36, which contains military instruction requirements and OCS also ensures that the U.S. Army Center for Initial Military Training task list is followed. That task list is the same as it is for the Reserve Officer Training Corps and the U.S. Military Academy at West Point, New York, the Army’s other commissioning programs. 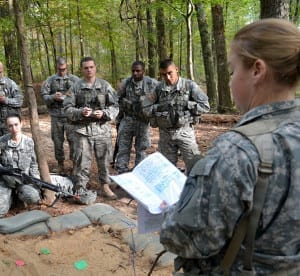 Candidate’s perspective
Candidate Jonathan Winter recently completed OCS and is awaiting his secret clearance — which is still being processed by the Office of Personnel Management — before getting his second lieutenant bars. He has a four-year degree and a post-graduate Juris Doctor degree. He will become an infantry officer.

Winter gave his perspective of OCS and compared it to Basic Combat Training, which he attended immediately prior to OCS. Both basic training and OCS are at Fort Benning.

OCS is more physically and mentally demanding than basic training, he said. However, a candidate in reasonably good physical fitness shouldn’t have any problems completing the course.

For example, “when I took on the role of company commander, I was given a schedule for the week and had to ensure 90 people went from here to there. You have to be well organized and also be able to delegate responsibility,” he said.

In the field leadership exercises, “you lead your platoon and they do platoon and squad missions, patrolling and reacting to simulated attacks, getting to your objective,” he said, adding that training models are built and pre-mission briefs are conducted as well.

All of this training is under the watchful eyes of the cadre, who assist and evaluate, he said.

Some candidates have to recycle, he said, particularly those without any time in the Army except for basic training.

Those who are recycled often have not yet mastered basic skills like land navigation and leadership, he said. “Those soldiers coming from the force come much better prepared and typically succeed throughout the course.”

In the past when the nation was at war and the need to turn out officers for rapid build-up was required, OCS was the go-to place for getting that done in large numbers, he added.

Davis concluded: “Many enlisted soldiers are doing great things for the Army every day. OCS is their chance to take on even more responsibility and continue to do great things by becoming commissioned officers. Every soldier deserves a great leader; every NCO deserves a great commanding officer.”