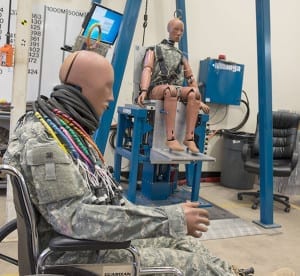 In an unassuming warehouse on Aberdeen Proving Ground, Md., sit nearly 50 men in uniform, waiting for their mission during an upcoming test event. They’re sporting Army Combat Uniforms, standard-issue boots, a crane hook protruding from their heads, and a plethora of color-coded wires spilling out the back of their necks.

These men are not human, but rather part of the Aberdeen Test Center’s “anthropomorphic test device inventory” — the scientific term for a crash test dummy collection.

Charged with a mission to put any and all Army materiel through rigorous testing, the Aberdeen Test Center works diligently to ensure equipment made to protect Soldiers will do just that. This includes vehicles armored to defend against roadside bombs, mines, and any other explosive a vehicle could drive over.

This is where the test dummies come in.

According to Anthropomorphic Test Device Laboratory director Christopher Monahan, test dummies are used to determine the likelihood of a Soldier being injured inside a vehicle during an under-body blast.

“(A test dummy) is put in each seat of a vehicle during an under-body blast test event,” he said. “We look at the data they collect to see if a Soldier would be injured if they were sitting in that same seat.”

Each test dummy is equipped with more than 50 data channels, including load cells, accelerometers and tilt sensors, spread throughout its head, chest, pelvis and extremities that allow the U.S. Army Test and Evaluation Command determine whether a Soldier would sustain a skeletal injury in a similar real world situation.

The test dummies used by the Army, which cost $150,000 a piece, are the same ones Americans would likely recognize from videos of car crash testing or the popular Discovery Channel show “Mythbusters,” which stars a crash test dummy named “Buster.” 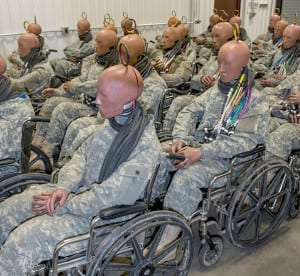 Aberdeen Test Center at Aberdeen Proving Ground, Md., employs an expansive inventory of “anthropomorphic test devices,” otherwise known as crash test dummies, to ensure armored vehicles will protect their occupants from roadside bombs. Most represent the average male soldier, while others represent female Soldiers or larger males. According to lab technicians, the easiest way to move the ATDs from place to place is via wheelchair due to their cumbersome weight.

“Our (dummies) weren’t intended for military use,” Monahan said. “They are based on automobile industry models from the 1970s…”

Most of the equipment used in the lab mirrors that of a commercial crash-test facility, except for one. Because the dummies are repurposed, they don’t inherently provide all the data the Army is looking for. To circumvent this issue, the Aberdeen Test Center has developed a machine unique to the Army called a lumbar validation fixture.

Critical pelvic and lumbar injuries are common in under-body blasts, and the lumbar validation fixture helps technicians determine the condition of a dummy’s pelvis and lumbar spine before certifying it ready for a test event.

Before a dummy can be used in a test event, it must be meticulously evaluated. Monahan and the lab’s three technicians ensure each dummy’s physical composition, metal skeletal structure, sensors and electrical wiring all meet testing standards.

These evaluations take place at every juncture of testing. The expense of explosive testing demands that all components of the test event, including the dummies, be in precise working order. The failure of just one component of an dummy can void the entire test and possibly delay the fielding of a life-saving technology for soldiers on the battlefield.

“We do almost two weeks of work for a maximum of four seconds of data,” Monahan said.

According to lab electronic technician Kyle Rothrock, the results gleaned from just those four seconds allow for quick decision-making on the Army’s part.

“We’re able to find things sooner, rather than later,” he said, “It can result in quick-reaction fields for vehicles overseas.”

The lab is currently preparing for the arrival of a new model of test dummy, developed specifically by the Army, for the Army. The program that developed it, called WIAMan for Warrior Injury Assessment Manikin, is led by the Research, Development and Engineering Command.

Still several years away from practical use, the new model will combine new sensors (more than 140 channels of data) and draw on lessons learned from casualties in Iraq and Afghanistan to record data much more specific to underbody blasts than current models can provide. 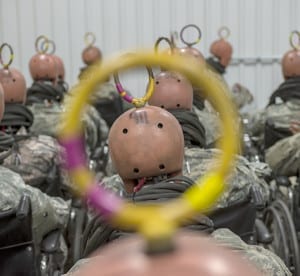 Anthropomorphic Test Devices (the scientific term for crash test dummies) are used by Aberdeen Test Center at Aberdeen Proving Ground, Md., to determine the likelihood of a soldier being injured inside a vehicle during an under-body blast like a roadside bomb. Each test dummy has more than 50 channels of data, including load cells, accelerometers and tilt sensors spread throughout its head, chest, pelvis and extremities that helps the U.S. Army Test and Evaluation Command determine if a Soldier would sustain a skeletal injury in a similar real-world situation.

The ingenuity of repurposing automobile industry test dummies has served the lab well thus far. The lab technicians are likely among the few in the country who use auto industry test dummies for this purpose. Their expertise is so unique that the lab draws customers from the Marine Corps, the State Department as well as private companies.

“We’re the only ones in the (Department of Defense) that do this,” Monahan said.

With a mechanical engineering background, the construction, validation and repair of test dummies wasn’t exactly part of his college curriculum, Monahan said.

“I never would have, or could have, learned about what I do here (in college),” Monahan said, adding that some principles from his education applied to the work. but other skills were learned on the job during his eight years at Aberdeen Test Center.

The newest addition to the lab, William Cabungcal, a young biomedical systems engineer who, like Monahan, never saw himself working in a test dummy lab, mirrored sentiments shared by his co-workers when asked what the best part of his job was.

“Our data actually means something,” he said.