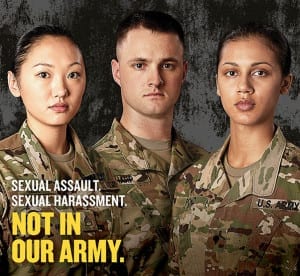 The Army and DOD will benefit tremendously from personnel completing the “2016 Workplace and Gender Relations Survey of Active Duty Members,” said Dr. Elizabeth Van Winkle, who worked on designing the survey. Survey results will be leveraged toward fostering a climate that is discourages sexual harassment and sexual assault and emphasizes that such behaviors will not be tolerated, she added.

About 700,000 invites to participate in a biennial gender relations study have gone out to active duty service members across the Department of Defense via email.

The congressionally mandated “Workplace and Gender Relations Survey of Active Duty Members,” conducted once every two years, assesses the rates of sexual assault, sexual harassment and gender discrimination in the Army as well as in the other armed services.

It’s the largest survey of its kind, according to Dr. Elizabeth Van Winkle, who serves as the principal investigator. In odd years, a similar biennial survey is administered to the Nation Guard and Army Reserve. The Defense Manpower Data Center also surveys service academy students on a biennial schedule as well.

Questions in the gender relations study focus on three periods of a service member’s life: the last 12 months of their service; the entirety of their military career; and their life before military service.

The survey ends September 29. The results, which will be published next spring, will be broken down by service and gender. Van Winkle said those results will be used by DOD and each of the armed services to determine the effectiveness of their sexual assault prevention and response programs and identify areas that need additional focus.

The results of the survey will also go to Congress and the administration and will be made public, she said.

The purpose of the survey
The Army and DOD will benefit tremendously from personnel completing the survey, Van Winkle said. Survey results will be leveraged toward fostering an environment that discourages sexual harassment and sexual assault and emphasizes that such behaviors will not be tolerated.

The survey is a chance for Soldiers who have been subjected to such unwanted experiences to be heard, but Van Winkle stressed that it’s just as important for service members who haven’t had such experiences to participate.

“Hearing from as many members as possible, regardless of their experiences, will help us assess the scope of the problem,” she said.

The survey could take as little as 15 to 20 minutes, but the time it takes to complete will depend on the experiences of the respondent and how much the respondent wishes to disclose.

“We’ve offered opportunities in the survey (for respondents) to provide open-ended comments,” she said.

WERE YOU SELECTED?
Since July 22, when the survey was released, Soldiers have been notified via an email that they’ve been selected to participate.

For soldiers who accidentally deleted the invitation to take part in the survey or who recently received a new email address and are concerned they missed the notification, they can still find out if they’ve been selected to participate by visiting the Defense Manpower Data Center website at http://www.dodsurveys.mil.

Click the “Am I in a DMDC Survey Sample?” button and then enter the DOD ID number from the back of your Common Access Card. If you are among those selected to participate, the website will provide a link to the survey.

In August, a paper form of the survey will be mailed out to those who have not yet responded. Either the web survey or the paper version can be completed during on-duty hours, Van Winkle said.

Soldiers who are concerned about privacy can rest assured that the survey is completely confidential, Van Winkle said.

“No identifying information is ever provided,” she said. “Our reports and data tabulation are aggregate only. We conduct disclosure reviews on all of our data sets and products to ensure that even combinations of data elements cannot inadvertently identify a respondent. We really take this responsibility very seriously.”

Past survey results
In response to the 2012 survey, about 26,000 active duty DOD service members reported having experienced unwanted sexual contact. That figure represents about 6.1 percent of active duty women and 1.2 percent of men, according to Van Winkle.

In 2014, the RAND Corporation was contracted to conduct the gender relations survey, Van Winkle said. That study showed a decrease in reports of unwanted sexual contact from 2012, a decline that could be due to increased attention from leadership on gender relations as well as new programs and policies put in place by the DOD’s Sexual Assault Prevention and Response Office.

“We’ve seen some movement in these rates over time, which is expected considering how crime rates often fluctuate, but we are interested in the direction of the trends,” she said.

Additionally, the Army is currently assessing the effectiveness of measures meant to prevent sexual harassment, sexual assault and retaliation at the command level.