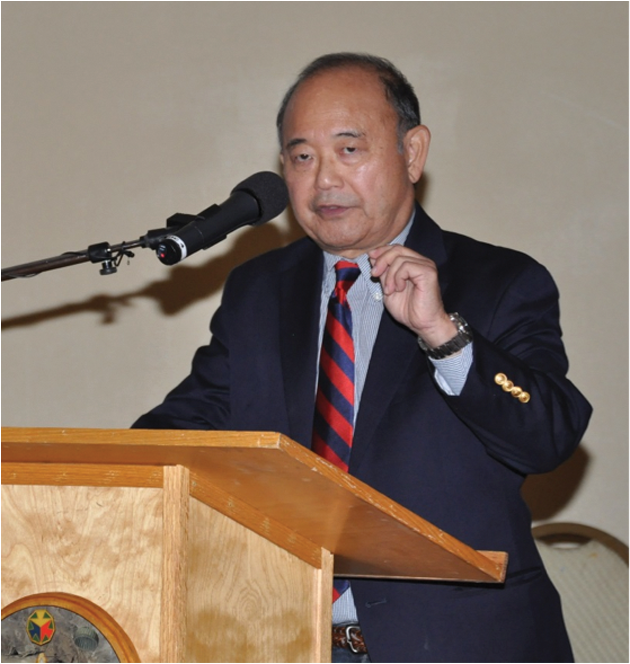 Hawaii-born stage and Hollywood actor Clyde Kusatsu, guest speaker at the National Training Center’s recent Asian-American Pacific Islander Heritage Month celebration, spoke about his personal challenges in breaking through cultural stereotypes, as a student and as a professional actor. As amateur historian, Kusatsu also spoke about little-known contributions of Asian Americans to the United States military since the War of 1812. His remarks below have been edited to highlight his personal journey from growing up in Hawaii to establishing himself as an actor in the Hollywood film and television industry.

Kusatsu was born and raised in the decade after World War II in Honolulu, when its Asian and Pacific Islander ethnic minorities together made up a larger majority of its population.

“When I was growing up in Hawaii, World War II was not that far in the past. The movies I used to see were all about World War II–the Pacific, of course, and the European theater. We used to play ‘war’ a lot. We’d go, ‘Let’s play the Pacific.’  But we (Asians) were really portrayed animalistic, not very well in the movies. So we’d go, ‘Let’s play Germany. Yeah, I’ll be a Nazi, if you want me to be the enemy.’ There was that kind of mindset.

“Today, when you turn on that television set, or stream shows on computer… you will notice on commercials, there is a blending.  It’s like [a cross-section] the American scene is being shown out there.

When Kusatsu, as a teenager, began thinking seriously about what he wanted to do with his life, he decided he wanted to become an actor.  After graduating from Iolani School, then a private Christian college prep school for boys, he enrolled at Northwestern University to study drama.

“…it was challenging. Like I said, you couldn’t find anyone who looked like me. In college, a professor said to me, “Why do you ever want to be an actor, when there is only The King and I, and Teahouse of the August Moon? How could you possibly think about making a living?

“…One of the things about the Japanese culture is “gaman.” You endure whatever is given you. Your boss, your wife, your kids, anything. And so, as long as you didn’t react, that was good. You withstood that, the pain. That was good. And if it so happened that you committed suicide, that was fine. That was the honorable way out. That was kind of the mindset, because fear and expressing what you feel was kind of frowned upon. And it’s encapsulated in the saying: “if the nail stands out, it is your duty to pound it down.”

… So I decided… I’m going to have to be ten times better, to take “the slings and arrows,” and not “fall on my sword,” so to speak. So I went back the next year, and tried out for directing scenes, children’s theater… And to make a long story short, for the next three years, at Northwestern University, I became a working member of the theater department.

“… to me, [it was about] perseverance. Endurance. And you do that, by continually focusing, striving harder and harder. And I can remember, I did summer stock, in Michigan cities and in Hawaii, in Aspen, Colorado….and all these roles, in college and summer stock, were never Asian roles. Or at that time, the nomenclature was “Oriental-American”–oriental.

“… But during that time, there were all the other Asian-American guys saying, “What’s that Clyde doing?” “Why is he doing all these kinds of acting?”

“…One time I remember, there was a call for Chinese barbeque sauce. And they were looking for a John Wayne type, an Asian.  And at that time, I was like, “I don’t do commercials.”

Out of 250 actors trying out for the commercial, Kusatsu got the job, partly by having practiced imitating John Wayne to entertain his friends and peers during breaks during stage rehearsals and shooting breaks on acting gigs. Some television script writers enjoyed his John Wayne shtick so much, they wrote in a character role for him for several episodes of Magnum PI, a popular detective show starring Tom Selleck in the 1980’s.

Immigrants from East Asia fight for America since 1812

Kusatsu then turned to other Asian-Americans who have been an intimate part of American military history.

“…I don’t know if a lot of people realize that the oldest Asian presence in the United States is in Louisiana.

“And that’s because Spain had conquered the Philippines…and they impressed a lot of Filipinos to be sailors in their galleys, to make the trip from the Philippines, with the gold to Mexico….A lot of the Filipinos had had it [with the Spanish] and they jumped ship. They knew their way across Mexico and landed in Louisiana. …Everyone has heard of the pirate Jean La Fitte, who …helped General Jackson defeat the British in the War of 1812, in the Battle of New Orleans. Well, amongst those fighters who fought with Jackson were about 400 Filipinos, who were sailors in La Fitte’s 3,000-man organization. And to this day, the descendants are still there.

“…in 1853, during a time of extreme famine and warfare in China, in Canton, a desperate father, to save his son, his 10-year old boy, sold him to a New England sea captain, for six dollars… when they landed in New Hartford, Connecticut, he was adopted by a family, and he took on their name, and he was now Joe Puce.

“…In 1862, he volunteered and enlisted in the 14th Connecticut Regiment of the Union Army.  And he participated and fought in the Battle of Antietam, Fredericksburg, Charlottesville, and Gettysburg. He survived the war, coming out as a corporal in 1865.

“…in World War I, the most notable Asia-Pacific American was a fellow named Tokutaru Toku Nishimura-Slocum.    Again, he was a 10-year old who was adopted by the Slocum family in Minot, North Dakota. And he fought with the 328th Infantry in France, where he was gassed. But he survived. And because he was a war vet, he was allowed to become a naturalized U.S. citizen following the conflict. However, the issei, or first-generation Japanese Americans became ineligible to join or become eligible for naturalization due to a 1925 Supreme Court decision of Toyota v. U.S. But subsequently through a one-man crusade and lobbying effort by this gentleman, Congress passed the Nye-Lea bill in 1935, granting naturalization citizenship rights for 500 World War I vets of Asian-Pacific ancestry.

Kusatsu then talked about his father, who was a member of the University of Hawaii ROTC program when the Japanese attacked Pearl Harbor in 1941, and who was one of the first Japanese-Americans to join the Army’s 100th Battalion, which later become part of the famed 442nd Regimental Combat Team that fought in Africa, Italy and Germany.

“…My father used to tell me when I was younger, a few of the stories. As he got older, the stories became less frequent, and he was not as willing to talk. I think, upon looking at it, that the memories became too painful.

“But he did talk stories about the times that they were assigned guard duty to the Afrika Korps prisoners of war in Alabama. And how they would say, “Watch them do their spit and polish drills with their guns, their rifles. They were crazy.  They gave them their rifles, and they did execute all the drills. They were quite impressed with the Afrika Korps.

“And a lot of times, when they were on maneuvers in Louisiana, they would catch the catfish and make sashimi for themselves. But they didn’t care for the water moccasins that would swim around.

“They were given white status. So they used to have a lot of fights about that. Especially when they heard the word “Jap.” In Hawaii, that was fighting terms. But the mainland Japanese had learned to survive by not getting engaged by that kind of …they were more contained. Because they had to survive.

“…They were sent to do the most impossible missions. And they achieved it. They were there to liberate Rome. But the whole ceremony for the liberation of Rome, the unit was set aside, while the haole (Caucasian) troops were walked in. And with the news reels and everything like that.

Asian-Americans and the American Experience

“…So you know, this is what it is. We can sit back and say the unfairness of it all, but it is about legacy. This is to inform people that the Asian-Americans have contributed to the nation at the highest levels. You look all around, all the services… Gen. Shinseki was Chief of Staff of the Army, he was a West Point grad. Talk about grit. He still, after being wounded in the foot with a grenade, still maintained fitness, to continue up the chain of command. There are Japanese-Americans, Chinese- Americans–Army generals, Air Force generals, Navy admirals, commanders, we’re all spread around.

And we must acknowledge that.  To me, one of the most leveling aspects of our society is the function of our military, which honors achievement, perseverance, resilience–all important factors to keeping our country strong.

“…when 9-11 happened, a lot of the Japanese Americans knew what was going to happen. Especially if you were Muslim American. The identifiers–the Hajib, the look, what singled you out. Because that’s what happened in 1941, in 1942.

“We are not that far away in time from then. We need to learn from this knowledge and legacy, when we are talk about today. It’s important that we are reminded. It’s not old news. It’s always new news.

If we want to instill the sense of belonging, we must bring acceptance. And that’s what you guys here do. In the military.  It’s part of the service you provide to our country, and our culture, and our society.