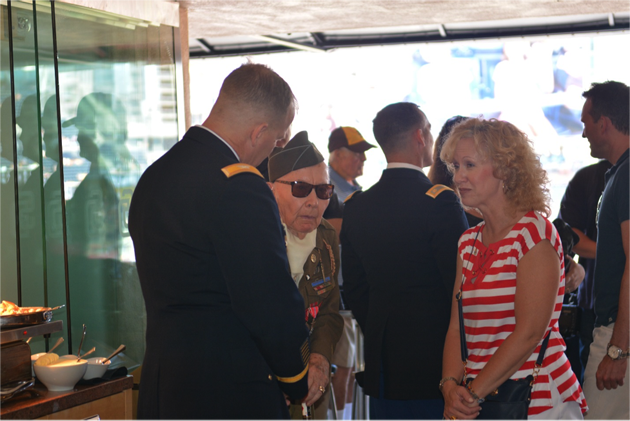 The San Diego Padres major league baseball organization honored the U.S. Army and Army National Guard with a pre-game celebration that included Soldiers and leadership of this installation, Jul 17.

Sgt. Stephanie Jones, of the Fort Irwin Protocol office, sang the National Anthem She returned during the bottom of the eighth inning and sang God Bless America.

A color guard of non-commissioned officers from the Fort Irwin Sergeant Audie Murphy Club displayed the colors of the nation and the Army.

Soldiers also marched onto the field and stood at the first and third base lines of the diamond. Over 40 Soldiers from the installation participated by representing the 11th ACR, 916th Support Brigade, Fort Irwin USAG, Operations Group, and United States Army Medical Department Activity. They were joined by Eric Fanning, Secretary of the Army who swore in 20 future Soldiers.

Three Soldiers of 2nd Transportation Company staffed a static display inside the stadium. They spoke with the public and answered questions regarding a M1240 Mine Resistant Ambush Protected vehicle.

The Padres played the Giants for 9 innings, with the San Diego team winning 5-3.

Education fair a jumpstart to degree