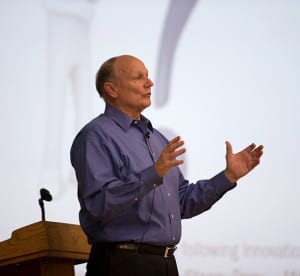 Secretary of the Army Eric Fanning addresses Army civilians and members of the Army staff during a town hall meeting, Aug. 23, 2016.

Reflecting on his most recent trip to the Pacific, which included a stop in Malaysia, Secretary of the Army Eric K. Fanning said he was impressed by the interaction he observed there between American Soldiers and Malaysian forces, who are now participating in Exercise Keris Strike.

“It impressed upon me something that I didn’t see in my time in previous services that do a lot of exercises as well,” said Fanning, who has served in the past as acting Secretary of the Air Force, and also as an undersecretary with the Navy.

“When the Army interacts with another army, it is from the most junior soldier all the way up to the most senior soldiers. There is interaction between soldiers at all levels that you don’t see with the way other services do their exercises, just by nature of how they fight, how they are organized, and the platforms they use.”

That kind of interaction between soldiers he said, puts a face on the United States in a way that is not possible through other diplomatic efforts.

“There are 15,000 … United States Foreign Service officers,” he said. “We have 150,000 Soldiers outside the continental United States right now today, 10 times as many U.S. Army Soldiers around the world than there are foreign service officers. And many of them are interacting and representing the United States and doing it really well. Those Malaysians were really excited to be exercising and to be learning from Americans.”

Fanning spoke on Tuesday, Aug. 23, at the Pentagon to a packed house of Army staff on his priorities for the coming months as part of his first town hall meeting there. He said he plans to give such talks more often in the future.

Taking care of soldiers
“For me, we have to keep the pressure on prevention of sexual assault. We have done a lot on responding to sexual assault. But I’d like to make the response stuff unnecessary,” Fanning said.

“We get a lot of heat on that issue — and we should. We should be held to a higher standard. But the benefit of that for the country is that we do lead the way on working on a lot of these issues. We’ve made a lot of progress that people outside the military are straining to look into and learn from and build on. We have to keep the heat on.”

Suicide prevention, he said, is another area where the Army has led the way. That’s an area where he wants to keep the pressure on to solve as well.
“I get asked about this a lot,” he said, noting that there is a misconception about the prevalence of suicide in the Army. The Army is only slightly worse than the rest of society.

“But one is too many,” he said. “What I really want to focus on is where that’s related to behavioral health issues.” 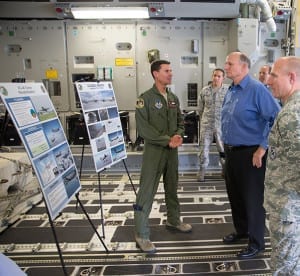 Secretary of the Army Eric Fanning meets with American Soldiers participating in an exercise in Malaysia, July 29, 2016.

He said researchers in and out of the military are looking at the issue — and that the research has given rise to even more questions. Researchers are still learning about post-traumatic stress disorder among World War II veterans, for instance.

“But if somebody joins the Army, serves their country, is willing to make the ultimate sacrifice, we need to know from the behavioral health side if they have done anything in the line of service that has caused them problems,” he said.

“They deserve to have it diagnosed, and they have earned the treatment that comes with it. We need to do some more work on that.”

“It’s really designed to focus on [those times] where we see our overmatch on our capabilities isn’t really where we thought it was going to be,” he said.

Most recently, that’s been informed by what Russia is doing in Ukraine and Syria, in the way of cyber, electronic warfare, position navigation timing and survivability. What’s being seen there raises questions about Army readiness in those areas, Fanning said.

“These are anti-access-type capabilities where we need a larger gap than what we have,” he said.

The Rapid Capability Office is not about getting equipment out to the field faster, he said. It’s about capabilities.

He said that much of what the Rapid Capability Office will do will be aimed at streamlining bureaucracy in places that now stymie efforts to bring the latest technology to the warfighter as quickly as possible.

Army Headquarters organization
Fanning also said he and Chief of Staff of the Army Gen. Mark A. Milley will soon be looking at how the Army headquarters is organized. He was quick to add that this had nothing to do with the number of people involved or the dollars going toward personnel.

“I think we have cut the headquarters enough, and I think in many places we have cut too far,” he said. “This is trying to get at the hardest part of reorganization, which is what do you do differently, and what do you stop doing.”

“We want to find ways to inject our thoughts and guidance earlier in the process, which hopefully saves you a lot of time, because you’re not having to move something up through the system and get it thrown back down and back up and back down, he said.