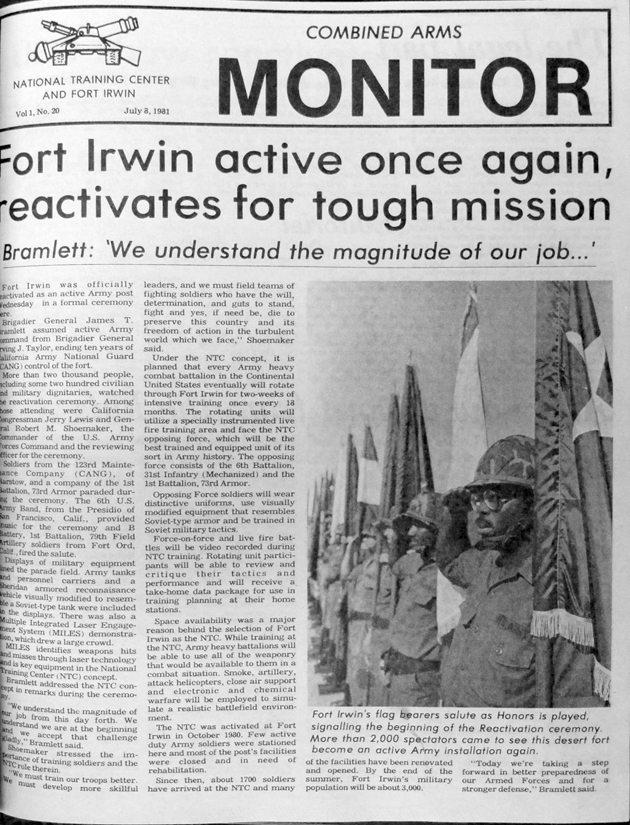 In 1981 the command of the New National Training Center published the NTC’s first newspaper, the Combined Arms Monitor. The name was chosen by committee, the final name a combination of two submissions by Lieutenant’s Patrick Quinn, from Weed Army Hospital and Kenneth Knox, aide-de-camp to Brig. Gen. James Bramlett, the first commander of the National Training Center.

In the National Training Center Public Affairs Office is an archive of old editions of the paper, neatly bound in volumes, sorted by year. Many showing their age, pages yellowing, edges tattered, they are the result of the combined efforts of Soldiers, Army Civilians, contract employees and many dedicated volunteers. Professionals, who with each story attempted to inform and engage the installation and surrounding communities.

Many people had a hand in shaping “The High Desert Warrior,” each adding a piece of themselves over the 35 year run of the print edition. The size of the Warrior staff varied over time, with as many as 18 people contributing to the weekly edition. When the staff dwindled down to one full-time employee and a couple of part time writers, the decision to become a monthly paper was made.

Over the years, the pages of the Warrior were filled with stories of the people of Fort Irwin. Many of the stories were what some considered “fluff” pieces, stories about cake decorating classes, grip and grin photos and other day to day activities.

But the Warrior also covered more hard news stories, many about the loss of community members, often resulting in another cross along Fort Irwin Road. There were many stories about the tough realistic training conducted at the NTC, and stories of the people who trained and sustained “the Force.” Commanders also used the paper as a vehicle to get their message to the population of the NTC, to set new policies or clarify orders. And for many years, it worked. There was even a NTC cartoon for a time.

Today most people don’t take the time to sit and read a hard-copy paper, we are all plugged in, scanning our phones and computers for the latest news. A story that is a month old is history, not news.

So the time has come to say good-bye to the Warrior as we know it today. However the High Desert Warrior isn’t going away, by changing to a digital edition, the news and events of the National Training Center will be accessible faster than ever.

It’s been an honor and a privilege to be a part of the Warrior for the last 11 years. As I put the final print issue to bed, it’s a little sad, but time moves on.