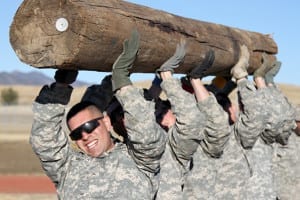 Staff Sgt. Miguel Sierra vividly recalls himself and his staff handling logistical matters in the aftermath of a sailor committing suicide.

As a behavioral specialist and the noncommissioned officer in charge of the Army Health Clinic at Schofield Barracks, Hawaii, Sierra said this experience impressed upon him the importance of teamwork and the need for Soldiers to maintain awareness of signs of distress among their fellow Soldiers.

Sierra recalls that just nine years ago, Soldiers would receive “after the fact training,” meaning that units provided suicide education only following a suicide.

“When that happened enough times, people realized the issue was more serious than it was,” he said. “Now, commanders and NCOs are getting the word out about suicide prevention. They’re being more proactive and less reactive.

These days, commanders are more respectful of the advice of psychologists, psychiatrists and other health professionals who are trained to identify suicide risk factors and conditions that can serve as precursors to suicide like traumatic brain injury and post-traumatic stress disorder, he said.

Sierra’s current job involves offering “reintegration program” guidance to Soldiers returning from deployment. He sits down with them and discusses the challenges they will face in the peacetime environment and briefs them on the services that are available should they feel depressed.

However, he is quick to add that, just because a Soldier hasn’t deployed, that doesn’t mean the soldier isn’t at risk.

There was a time when Soldiers felt too ashamed or embarrassed to seek help for suicide, depression, PTSD and other behavioral health issues, he said. That only further alienated the person, and besides, it just isn’t true.

“It is still not easy for Soldiers to come and see us but over the last five years,” he said. “We’ve done a good job in telling them it’s not a sign of weakness to seek help.”

Now, even commanders and first sergeants are sharing with Soldiers about their own struggles with depression or PTSD.
“Their testimony is even more effective than what I do,” he said. “The message is, it’s okay to seek help.”

Suicide ideation symptoms
Warning signs that a Soldier may be contemplating suicide, Sierra said, can include a simple change in demeanor, the manifestation of unusual behaviors, or a Soldier avoiding interaction with his or her children, spouse or coworkers.

“Who knows what a person is like better than the person you’re with every day? That person can sense a demeanor change,” West remarked at a Defense Writers Group on Aug. 18.

The first time a behavioral health specialist meets with a person, the specialist will be unfamiliar with the person’s usual behavior and personality and, for that reason, may not immediately recognize a difference in attitude or outlook.

A battle buddy or spouse who interacts with the person every day, on the other hand, might easily notice such a difference.

Buddy aide program
According to Sierra, the Army has for some time encouraged Soldiers to look after their fellow Soldiers using the “buddy aide ACE” system, with ACE standing for “ask, care, escort.”

In this system, the buddy aide, a fellow Soldier, “asks” whether a Soldier is doing okay and is trained to “care” for the Soldier by watching for symptoms of suicidal ideation like emotional outbursts, signs of depression, the giving away of possessions or mentions of feelings of helplessness.

If the buddy aide does notice such signs, the buddy aide will then “escort,” or guide the Soldier to a chaplain or behavioral health expert for care and treatment.

The Army has seen a dramatic increase in behavioral health visits by Soldiers, West said, from 900,000 patients two years ago to more than 2 million within the past year.

The increase doesn’t mean the problem is getting worse. It means the word is getting out that seeking help is okay, she added.

There are 62 teams supporting 176 operational units now, West said. The Army’s goal is to reach 65 behavioral health teams in 197 units. West would like to achieve an even number, but funding and manning restrictions must be taken into account.

“I’ve been out to various areas and they were very well received. The line really appreciates it,” West said of the embedded behavioral health teams.

“We’ve found there’s a decrease in hospitalization rates as well for behavioral health issues. So where before you had to send Soldiers to a hospital and got to a point where they were in such a dire position that they had to be hospitalized — that decreased by 40 percent.”

The teams, she said, are composed of psychologists and psychiatrists and social workers. A total of 1,700 of these providers are embedded in units and in military treatment facilities, a number that’s doubled over the last several years.