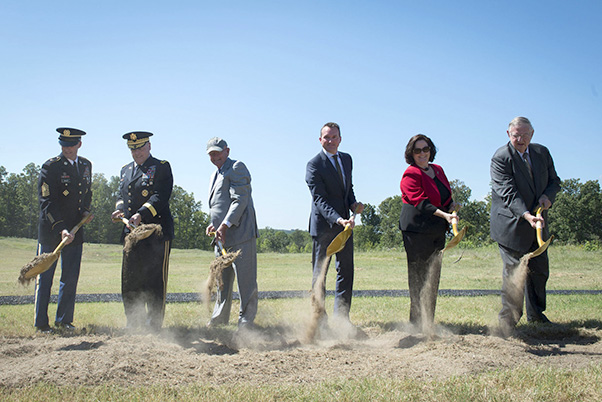 “And most importantly, this museum is a tribute to those 30 million Soldiers who’ve worn this distinguished uniform … and their loved ones who supported them,” he said.

“We’ve waited 241 years for this moment,” Secretary Fanning said of the groundbreaking for the museum. “It’s almost impossible to separate the Army’s story from this nation’s story. In so many ways, the history of the Army is the history of America.”

The Army’s chief of staff said he believes the museum will offer visitors an experience they can’t find in history books or online, and that a visit to the museum will enhance visitor’s knowledge of United States and its Army and convey, “the cost and the pain of the sacrifice of war, not in dollars, but in lives.”

In the museum, Army weapons, uniforms, equipment, and letters written by Soldiers at war will help visitors better connect with their Army, Milley said. 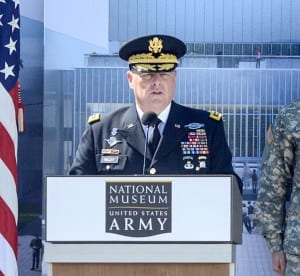 Chief of Staff of the Army Gen. Mark A. Milley speaks at the ceremony for the National Army Museum at Fort Belvoir, Va., Sept. 14, 2016.

Telling American story
The Army, Fanning told the audience, is even older than the nation it defends, and its history and the nations have been intertwined since the beginning.

From the Revolutionary War to the wars in Iraq and Afghanistan, the Army has borne the greatest share of America’s losses, Fanning said. Fully 85 percent of all Americans who have given their lives in defense of the U.S. and its interests have done so while serving in the Army.

Besides fighting the nation’s wars, Soldiers have also been pioneers, Fanning said, citing the achievements of Capt. Meriwether Lewis and 2nd Lt. William Clark. Together, they led a team to explore and map the Western U.S., an effort that came to be known as the Lewis and Clark Expedition.

Another example cited by Fanning was the effort by the Army Corps of Engineers to aid the construction of the nation’s roads, railroads, canals and bridges.

Fanning said he is reminded of the Army’s pioneering history every day by a framed piece of regimental colors in his office. Those colors are what remains of the standard carried in the Civil War by the 54th Massachusetts, the Army’s first African-American regiment.

That small piece of flag will be displayed in the National Army Museum, “joining thousands of artifacts that will help tell our shared story,” Fanning said. “The museum will strengthen the bonds between America’s Soldiers and America’s communities.”

A virtual museum
Retired Chief of Staff of the Army Gen. Gordon R. Sullivan, who now serves as the chairman of the Army Historical Foundation Board of Directors, said the museum is meant to “tell the comprehensive story of the Army history as it finally deserves to be told.”

That story, he said, will include all components of the Army, and will also include the story of the Continental Army, which existed even before the birth of the U.S. 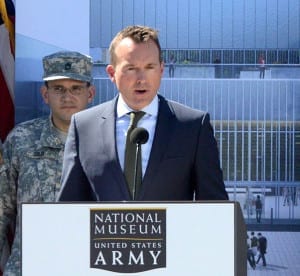 Secretary of the Army Eric Fanning speaks at the ceremony for the National Army Museum at Fort Belvoir, Va., Sept. 14, 2016.

The museum, he said, will also be a “virtual museum, without walls, having connectivity with all of the Army museums.”

Also significant, Sullivan said, is the museum’s location. The site chosen at Fort Belvoir is less than seven miles from Mount Vernon — the home of the Continental Army’s first commander-in-chief, Gen. George Washington.

Telling the Soldier story
Retired Gen. William W. Hartzog, vice chairman of the Army Historical Foundation Board of Directors, said one of the first things visitors will see when they enter the museum is a series of pictures and histories of individual Soldiers.

“We are all about Soldiers,” Hartzog said.

During the groundbreaking ceremony, attendees heard some of those stories for themselves. Capt. Jason Stumpf of the 92nd Civil Affairs Battalion, 95th Civil Affairs Brigade at Fort Bragg, N.C., for instance, took the stage to talk about his wife, 1st Lt. Ashley White-Stumpf.

“She was doing what she did for a greater good and she always believed this,” he said. She was killed in Afghanistan in 2011.

“She only wanted to help and answer the call,” he continued. “Ashley would be the first to stand in the entryway and say she’s not the only one that answered the call. Many before and many after her will do the same thing.”

White-Stumpf’s story will be one of many told at the new Army museum. Another will be that of now-deceased Staff Sgt. Donald “Dutch” Hoffman, uncle to Brig. Gen. Charles N. Pede, who now serves as the assistant judge advocate general for Military Law and Operations.

Pede said his uncle got the name “Dutch” because he grew up as a tough kid on the streets of Erie, Penn., and was always in trouble or “in Dutch.”

Dutch enlisted at age 17, Pede said, and soon found himself in Korea. During his first firefight, Dutch had been scared. But shortly after, he attacked an enemy machine gun position by himself, rescuing wounded Soldiers and carrying them to safety. He earned a Silver Star for his actions.

He would later be wounded in battle and left for dead, Pede continued. But a “miracle-working” Army doctor brought him back to life.

Finally, now-retired Brig. Gen. Leo Brooks Jr. spoke about his late father, retired Maj. Gen. Leo A. Brooks Sr. When Brooks the senior entered the Army in 1954, his journey was filled with challenges, Brooks Jr. said, as the Army had only recently become desegregated.

Brooks senior had to earn the respect of others as a leader, his son said. That he became a leader was due to the sacrifices of others before him.
Brooks junior said he and his brother, Gen. Vincent K. Brooks, who now serves as commander of U.S. Forces Korea, U.N. Command and Combined Forces Command, both looked to their father for guidance — and followed him into the Army.

We “naturally followed in his profession because we could see and feel the nobility of the Army’s core values he instilled,” Brooks junior said.

Today, the Army is the only military service without its own national museum. The National Museum of the United States Army, to be built on 80 acres of land at Fort Belvoir, will remedy that.