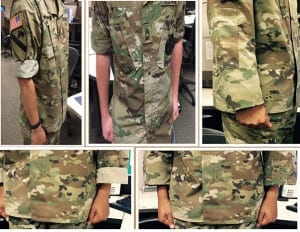 Uniform sleeves can now be rolled either with camouflage facing in or out, depending on the preference of commanders down to the company level.

In addition to the new guidance on rolling sleeves of the Army Combat Uniform in garrison, commanders in the field can now authorize Soldiers to cuff ACU sleeves either with the camouflage facing in or out.

The changes are effective immediately, according to a memorandum signed Sept. 27, by Lt. Gen. James C. McConville, the Army’s deputy chief of staff, G-1.

For the past three months, sleeves had to be rolled or cuffed with the camouflage facing out. The new guidance gives commanders more flexibility.

“These changes enhance individual readiness and morale and give greater flexibility to commanders in determining the needs of their Soldiers in the performance of their mission,” said Lt. Col. Jerry Pionk, spokesman for the Army G-1.

The original G-1 memorandum authorizing Soldiers to roll ACU sleeves with camo facing out was issued June 28 of this year. Army Chief of Staff Gen. Mark Milley decided on the uniform change, following requests from Soldiers throughout the force made through Sgt. Maj. of the Army Daniel Dailey. The decision followed a month-long trial with Soldiers at Fort Hood, Texas, rolling their ACU sleeves.

Until then, sleeves had not been rolled since the battle dress uniforms or BDUs were phased out almost a decade ago.

The decision on how to roll or cuff sleeves can be made by company commanders of the Army National Guard and Army Reserve as well as the active component. During a battalion, brigade or higher formation, the most senior commander will decide how the uniform will be worn, according to the guidance.

Sleeves can only be rolled in garrison, and despite whether the camouflage is exposed or rolled inside out, the sleeves must be rolled neatly above the elbow, but no more than three inches above the elbow. Sleeves of the Army aircrew combat uniform, or A2CU, will not be rolled under any circumstances, the guidance states.

During field training or when deployed, commanders may authorize Soldiers to cuff their ACU sleeves one or two times, either inside or out.

The changes are an exception to Department of the Army Pamphlet 670-1, Guide to the Wear and Appearance of Army Uniforms and Insignia, until a new pam is issued.