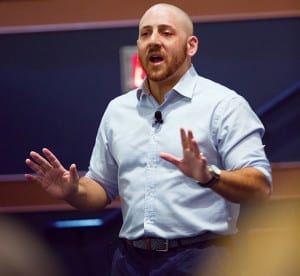 Kevin Hines speaks of his life before and after his suicide attempt in 2000. Hines spoke at Thurman Auditorium on Suicide Prevention Day, Sept. 15, 2016, about the power of hope for those that despair.

Kevin Hines jumped off of the Golden Gate Bridge 16 years ago and survived. He described it as “one of the most violent and scary ways imaginable” to die.

He spoke to the Fort Belvoir, Va., community Sept. 15, in Thurman Hall, as part of national Suicide Prevention Month. The event was hosted by the Army Substance Abuse Program.

The day he decided to jump was the day he wanted to end his pain — what he called his “brain disease.” He was diagnosed with Bipolar Disorder Type 1 when he was 17.

“I was stuck in the false belief that I was my family’s greatest burden,” he said. “If I had asked my family if that was the case, they would have told me I was wrong.”

But, Hines kept his troubles to himself, not sharing his pains with others. He frequently felt paranoid, had delusions, manic episodes and depression.

Although he was seeing a psychiatrist, he wasn’t getting the help he needed. Instead, Hines said he was loaded up with 14 pills a day that were making things worse.

When Hines jumped off the bridge, he felt instant regret. He is one of only 36 people to survive jumping off the bridge. When he did, he fell 75 mph and descended 70 feet below the water’s surface. The fall destroyed several vertebrae and caused several other injuries.

Realizing he wanted to survive, he struggled up to the surface, and he prayed that he would not drown.

“If you don’t survive, nobody will ever know that you don’t want to die,” Hines said.

Thanks to a serendipitous sequence of events, Hines survived the harrowing experience. A driver, who had seen him jump over the bridge, called a friend who was a Coast Guardsman on duty. Hines also learned later that a seal helped keep him afloat.

Hines joked that he thought it was a shark coming to eat him.

With a sober expression, Hines advised his audience that the best thing a person can do for someone who is at risk is to ask one question.

“When you see someone in the greatest pain they’ve ever experienced … you can walk up to them, put your hand on their shoulder and say, ‘Are you OK?'”

Asking the question and showing you care “has a transformative effect of helping them out of that dark place,” he said.

Many of those who survived jumping off the bridge also said they had regretted it the instant they jumped off. But there is a difference between having suicidal thoughts and actually attempting to commit suicide.

“I’m grateful every day I get to breathe on this earth,” Hines said. Had he done things differently, he would have shared his pain and his thoughts of suicide.

“Do it anyway,” Hines said about sharing pain you might be feeling. “You deserve to be here.”

An audience member also shared her story about a close relative who was having suicidal thoughts.

Calling mental illness a brain disease is a powerful statement to make, she said. Eight years ago, she had received a phone call from a distressed relative. She told her husband she had a change of plans and went to be with her relative.

Each year, more than 400,000 people die by suicide, according to the National Institute of Mental Health. NIMH has five steps you can do to help someone who may be having suicidal thoughts:
1. Ask the person if they are thinking about killing themselves.

2. Reduce their access to items that could help them die by suicide.

3. Listen to their thoughts and feelings. Doing so could reduce the chance of them hurting themselves.

4. Connect them with the National Suicide Prevention Lifeline by calling 1-800-273-8255, or online at suicidepreventionlifeline.org.

5. Follow-up with that person after their crisis. Doing so could decrease their risk of suicide.

For more information about suicide and prevention, visit www.nimh.nih.gov.