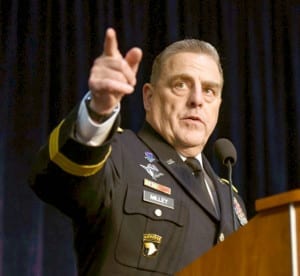 The future of the Army may not involve divisions, corps, tanks or Bradley fighting vehicles, said the Army’s chief of staff. And that future isn’t 100 years away, or even 50. It’s only about 25 to 30 years away.

Milley spoke Oct. 4 at the 2016 Association of the U.S. Army Annual Meeting and Exposition’s Eisenhower Luncheon. The Army of the future he described in his remarks bore little resemblance to the Army that Soldiers know today, not just in its technology, but also in how it fights and where it fights.

“I suspect that the organizations and weapons and doctrines of land armies, between 2025 and 2050, in that quarter-century period of time, will be fundamentally different than what we see today,” he said.

He cited the scenario of a Civil War combat Soldier attempting to visualize a World War II or Vietnam Soldier as the appropriate comparison for what Soldiers of today should expect in the way of change over the next two decades.

While the evolution of soldiering from the Civil War era to Vietnam took about 100 years, Milley said it won’t take a century for that level of change to happen again. It will happen in the next 20 to 30 years, the amount of time it takes a second lieutenant who commissions next spring to become a general.

“Rapid change has become increasingly compressed,” he said. “Those of us today will find it difficult to recognize the battlefield of 2035, let alone 2050.”

Future conflicts will come about in the same way conflicts come about today; nation states will fight to protect their interests, he said, and engage in conflict over territory or resources. But the ways in which nations wage war will change dramatically.

The weapons, the technology, and the domains will change. The battlefield will no longer be the battlefield that the Army Soldiers and the Army leadership train for today. Preparing for that new era will be one of the toughest challenges the Army will face in the next 25 years.

“[Soldiers will] operate routinely in a partially or significantly degraded environment,” he said. “That means we must invest in hardening our systems and, equally important, train on the techniques of operating with limited electronics. That’ll be a shocker for all of us. We may have to read a paper map again and learn to use a magnetic compass.” 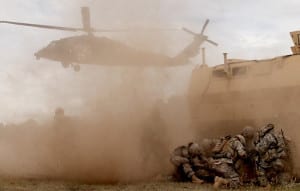 The future force will need to use every means of cover and concealment possible, due to the proliferation of internet-based sensors and other technology, Army Chief of Staff Gen. Mark Milley said. Soldiers will also need to operate in austere environments in small groups, possibly without communications with higher headquarters for weeks at a time, he said.

More significantly, when electronics fail, Soldiers will have to operate without communication with their higher headquarters. Milley suggested at an Oct. 3 press conference that lack of contact might continue for days, weeks, or even months at a time, and that Soldiers might need to operate knowing only the overarching strategic goal of their higher level of command.

Under those conditions, small units would be called upon to execute the intent of their commander, Milley said “without ever having actual contact with our higher headquarters for extended periods of time … This method will have to become a reality in everything we do.”

Operating without supervision, he said, will require a new kind of leader.

“The willingness to disobey specific orders to achieve the intended purpose, the willingness to take risks to meet the intent, the acceptance of failure and practice in order to learn from experimentation: these are all going to have to be elevated in the pantheon of leader traits,” Milley said.

The environment those Solders will operate in, he said, will be “highly lethal,” and “unlike anything our Army has experienced, at least since World War II.”

Milley then drew attention to the proliferation of technology and its decreasing cost, which makes it possible to connect everything — and to put sensors everywhere.

“It has become cheap, to the point where there are way more [internet-connected] communication devices than there are people … no matter where you go in the world today, it’s observable from some device,” he said.

With sensors everywhere, he said, Soldiers in the future will have to operate with the understanding that, “the probability of being seen is very high. And as always, if you can be seen, you will be hit, and you will be hit fast.”

Milley said formations will need to be small, on the move constantly, and will have to “employ every known technique of cover and concealment.”

That also means an end to the warfighting environment that Soldiers know from serving in Iraq or Afghanistan. In future conflicts, there won’t be a place for something like Victory Base Complex in Baghdad, or an installation like Bagram, Milley said. “That fact requires a significant change in our current methods of thinking, training and fighting.”

The warfighting environment for the Soldiers of the future, he said, “will be extremely austere. Water, chow, ammo, fuel, maintenance and medical support will be all that we should plan for.” Soldiers will no longer be able to count on comforts like fast food and showers.

“Being surrounded will become the norm, the routine, the life of a unit in combat,” he said. “In short, learning to be comfortable with being seriously miserable every single minute of every single day will have to become a way of life for an Army on the battlefield that I see coming.”

Even the meager resupply will be different. Soldiers might , in some cases, be expected to produce water for themselves, Milley said, or even devise replacement parts for their gear with 3D printing. When lines of communication are open, a robotic supply convoy might be “the only acceptable method of supply that we can get to forward troops.”

Milley described the battlefield of the future as non-linear and predicted that friendly forces may face significant geographic dispersion.

“This type of battlefield will place a very high premium on independent, relatively small formations that are highly lethal and linked to very long-range precision fires,” he said. “Our formations will come under enemy fixed-wing, rotary-wing, [unmanned aerial vehicle] and missile attack on a routine basis.”

Ground forces will no longer be able to depend on the dominance of the air provided by another service, but instead, “units are going to have to be combined arms, multi-domain capable.”

“We will still have to fight and destroy land-based enemy units and seize terrain,” Milley continued, “but the Army … we’re going to sink ships. And we’re definitely going to have to dominate the airspace above our units from hostile air or missile attack. This is going to require sophisticated air defense capabilities that are not currently in our unit inventories.”

And there will be somewhat of a role reversal as well, he said. Land-based forces will need to penetrate denied areas to assist air and naval forces, which is “the exact opposite of what we have done for the past 70 years, where air and naval forces have enabled ground forces.”

Will the Army be able to achieve the changes Milley predicts? He thinks so.

“We’re the United States Army,” he said. “And our enemies need to know these colors don’t run from tough fights. We will adapt and we will evolve our current force. But in the end, we will win. That much I can tell our enemies … They can take it to the bank.”