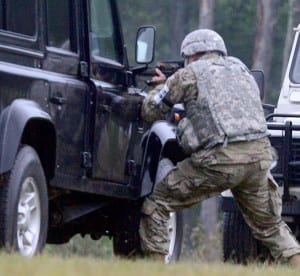 Schroeder, command sergeant major of U.S. Army Forces Command, was speaking on a “Soldier Readiness” panel at the Association of the United States Army Annual Meeting and Exhibition Oct. 4. Sgt. Maj. of the Army Daniel Dailey introduced the panel.

“The chief [of staff of the Army] talks about teams, and every member of the team needs to play their position and be experts at it,” and that includes NCOs, Schroeder said.

The bottom line, he said, is that sergeants are key to Army readiness. Every one of their Soldiers should be deployable.

Schroeder then enumerated all of the responsibilities of NCOs from staff sergeant through sergeant major, all of which had their beginning foundation at the sergeant level.

The problem with NCOs today, he said, is not at the platoon and company levels. They do well at readiness at those levels. However, when they get to the battalion and brigade levels at the combat training centers, they’re “outside their comfort zone,” he said.

By that, Schroeder meant that engineers know engineer stuff and infantrymen are comfortable with infantry tasks, “but they forget enablers.” Enablers are critical to mission success because infantry must know how to talk to engineers and other enablers to be successful on the battlefield.

Logistical readines
Over the last 15 years, the role of NCOs has diminished as contractors have taken over much of the work NCOs have done in the past, such as logistics and maintenance, said Kevin J. Bostick, Army Materiel Command’s deputy chief of staff, G-4 for logistics integration.

“We relied too much on contractors,” he said. “Now, NCOs must be responsible. They need to understand the supply system and distribution system and what aspects are available to them. It’s about core competency and getting back to basics.”

Ecker believes that NCOs, particularly sergeants, should be the ones ensuring the Soldiers under them are getting their medical and dental appointments, as well as adequate sleep, activity and nutrition. If the sergeants do all of that, readiness will greatly increase.

“Let’s not just leave it up to the commanders,” he said.