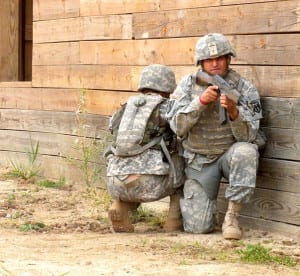 Engineers and designers at the Natick Soldier Research, Development and Engineering Center, or NSRDEC, have patented a blast debris protective harness. The harness is worn outside the pants. It was designed to protect the groin and femoral artery from blast debris and has since been adapted to also provide fragmentation protection.

Engineers and designers at the Army Natick Soldier Research, Development and Engineering Center have patented a new design for a harness that protects its wearer from blast debris.

Worn outside the pants, the harness is designed to protect the groin and femoral artery and prevent debris from embedding in and around the groin. Such injuries can be so severe that repeated surgeries are often needed to remove the debris, leading to extreme discomfort as well as health and hygiene issues. The harness has also been adapted to provide fragmentation protection.

“The protection that existed before was letting debris in because it wasn’t fitted close enough to the body,” said Cara Tuttle, an NSRDEC clothing designer and design lead. “Soldiers weren’t wearing it often enough, and it didn’t come down inside of the leg to protect the femoral artery.”

Before arriving at the harness design, NSRDEC considered several others, including under-trouser, within-trouser, and over-trouser designs. The ultimate design for the harness uses multiple layers of Kevlar that alternate as they overlap. 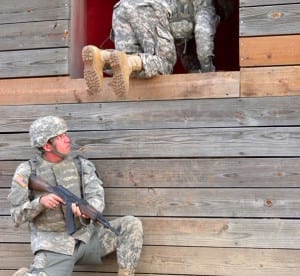 Engineers and designers at the Natick Soldier Research, Development and Engineering Center, or NSRDEC, have patented a blast debris protective harness. The harness is worn outside the pants and hugs the body without hindering movement.

The resulting design hugs the body without hindering movement or range of motion. Project engineers partnered with NSRDEC’s Human Factors and Anthropology teams to achieve the snug fit. The design makes use of adjustable straps and buckles that allow for easy doffing and donning.

“It was challenging to add layers and area of coverage without impacting movement,” said Isherwood. “Whether you had to climb in a window or kneel, [the harness] needed to stay in place, but also allow full range of motion. The uniqueness of this design is that it’s stable but moves with you.”

Tuttle, who worked in the apparel industry for a number of years before coming to Natick, and Isherwood say they are dedicated to improving the quality of life and safety of the warfighter.

“There is nothing in the [apparel] industry quite like what we do here at Natick,” Tuttle said. “We are helping to protect the men and women who are protecting our country. Our work … has the potential to save lives.”

“[Our Soldiers] are volunteering to be put in harm’s way,” Isherwood said. “So anything I can do to protect them without compromising their effectiveness is the goal. That’s what we are trying to do every day.”

As with many protective items developed by NSRDEC, the innovation is expected to benefit the not just the war fighter, but also may, in the future, be licensed for use by first responders.