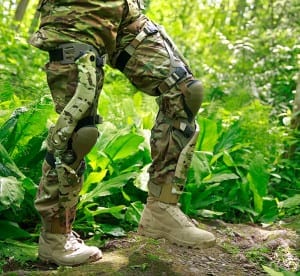 The bionic power knee harvester (pictured here), also known as the PowerWalk, is an energy-harvesting device. The device may reduce the number of batteries a war fighter needs to carry, potentially lightening the load and freeing up space in backpacks for other supplies, including food and water.

Today’s war fighters may one day find themselves knee-deep in power.

The bionic power knee harvester, also known as the PowerWalk, is an energy-harvesting device that is attached to both the upper and lower areas of both legs and generates power from movement. The device is still in development. Field trials will begin in 2017.

The device is designed to extract the energy expended when the knee is flexed and negative work is being performed. The system adjusts to a person’s gait, so Soldiers don’t feel like they are wearing a device and can even forget that they have it on.

“Just by walking, Soldiers could generate power,” said Noel Soto, a project engineer at the Army Natick Soldier Research, Development and Engineering Center, or NSRDEC. “We are converting the movement of the knees when you walk into useful power.”

Soldiers now carry multiple electronic devices that aid in strategy, communication and navigation, including computers, radios, mobile phones, battlefield situational displays and navigation tools — to name just a few. Being without power to run these devices could impact Soldier safety, performance and efficiency.

“The power generated by the device charges the main battery,” Soto said. “The goal is to reduce the amount of batteries used by Soldiers, or to be able to extend the mission with the same load. We have found out through studies that Soldiers are carrying a heavy load and a lot of that weight, 16 to 20 pounds for a 72-hour mission, is due to batteries.”

Heavy loads can increase injuries as well as impact mobility. In addition to potentially lightening the load by reducing the number of batteries needed, the energy-harvesting technology could also free up space in backpacks for other supplies, including food and water.

By wearing the device, Soldiers can generate power to recharge batteries for themselves or for others.

“The objective is to have the device weigh one pound and be capable of generating 3.5 watts and to have a device weighing two pounds able to generate 10 watts,” Soto said. 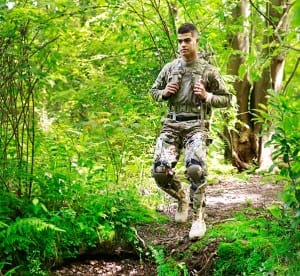 The bionic power knee harvester (pictured here), also known as the PowerWalk, is an energy-harvesting device that is attached to both the upper and lower areas of both legs and generates power from movement. By wearing the device, Soldiers can generate power to recharge batteries for themselves or for others.

NSRDEC is working with Bionic Power Inc. of Canada on the joint-service project, which will benefit the Army and the Marine Corps infantry. Project Manager Soldier Warrior, with the addition of the Office of the Secretary of Defense and USMC, leads the contract.

The project comes under the Joint Infantry Company Prototype Program, which came out of the Soldier Power Generation program. NSRDEC led the original concept for energy harvesting in 2012 through a congressional effort, and PM SWAR funded the next phase, SPG, in 2014.

The device could also serve to reduce the logistical burden.

“In remote places, it could potentially increase self-sustainability and independence by reducing the need for resupply,” Soto said.
The knee energy-harvesting device also reduces muscle fatigue during downhill walking.

“As a generator, it creates power,” said Soto. “As a motor, it could enhance movement. It could potentially be used in the future for human augmentation. It acts as a brake when you are walking downhill. It actually helps Soldiers by preventing sudden movement on the slope.”

For Soto, improving life for the Soldier and lightening the Soldier’s load are professional goals that also have personal meaning.

“I am a disabled veteran,” Soto said. “I know what it’s like to carry a lot of weight on my back. I served with the 82nd Airborne. Everywhere we went was uphill, both ways. Now, I’m in the driver’s seat and able to help. I know it’s worthwhile because I’ve been there. I know I’m doing something valuable for the Soldier.”