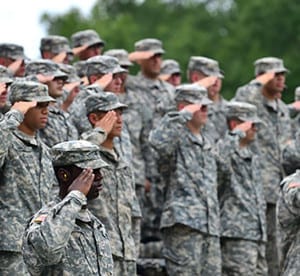 Career counselors are urging Army Soldiers to read the changes to the Army enlisted force retention program, re-class and initial entry requirements that took effect in 2016.

The changes not only ensure Soldiers are aligned into the fields best suited for them, but offer the most qualified Soldiers avenues for career advancement.

“In order to meet that mission we need key people to understand the responsibilities in embracing and communicating this program.”

Bar to continued service program
Formerly known as the Bar to Reenlistment Program, all enlisted ranks in the active and Reserve components can be notified of punitive separation due to performance issues ranging from fitness ratings to professional development standards through the Bar to Continued Service Program.

According to Sgt.1st Class Pedro Leon, TRADOC Retention Operations Active component career counselor, Soldiers can now be barred to continue service at any rank even if they were indefinite or career Soldiers.

Soldiers who are under the current NCO Career Status Program will not be grandfathered into the previous program. The bar will be reviewed at periods of three and six months before separation procedures begin.

Career program, time in service retention changes
Under the new directive, the Indefinite Reenlistment Program has changed to the NCO Career Status Program.

According to Leon, the program is similar in nature, but in an effort to align with the military’s new blended retirement system, the application date has been moved to a Soldier’s 12th year of service, rather than their 10th.

The directive also reduces retention control point levels, starting at the rank of staff sergeant, by reducing the number of years NCOs can continue to serve.

Every Soldier will have more than a year to plan their retirement as the implementation of the new control points will be staggered based on basic active service dates and rank.

CSM/SGM in nominative positions can stay past 30 years.

Re-class, initial entry changes:
When Soldiers re-class or recruits enter the Army they will have to take an occupational physical assessment test that determines if they are able to handle the physical demands of various career fields.
According to Leon, the test will determine a Soldier’s or recruit’s fitness level, which will directly correlate with jobs available to them. Those who score in the highest level will have every specialty available, while those who score lower will have the jobs at or below their level available.
Soldiers or recruits preparing to take the test should practice the following exercises to ensure they meet their desired specialty requirements.

For Leon, this means quality female NCOs must take the opportunity to step up as mentors to these new soldiers by re-classing into a combat position.

“I tell any female Soldier that comes into my office for career counseling to re-class into a combat position,” said Leon. “It’s a huge development and promotion opportunity. When you’re in a board and they see that you have combat experience, even if it was just for four years and you went back to your original MOS, that’s huge.”

Soldiers seeking more information on these upcoming changes should contact their supervisors and unit career counselors.

In order to best align Soldiers for their career path, supervisors and leaders must counsel their Soldiers on the new changes and professional development options and specialty paths available, said Pascual-Jackson.

“We are just facilitators, so when leaders don’t understand the purpose of the retention program for the Army or where they fit in, it’s a real problem,” said Pascual-Jackson. “It can cause confusion and unnecessary actions that could unnecessarily end a Soldier’s career.”

“Our line of effort and the mission of retention for the Army is readiness and end strength,” she said. “In order for us to meet our mission, we need leaders to understand their role, which is to embrace and communicate the retention program by instilling the importance to subordinate leaders.”