Donahue praised Broadwater’s ability to quickly transition into the position of commanding general, after the previous commander, Maj. Gen. Joseph Martin departed suddenly to take command of the 1st Infantry Division.  “We needed a quality commander and we knew where to go. We knew he would be able to step up and do the job with no notice. And do an excellent job,” he said.

It was something of a homecoming for the Broadwater family, who were last assigned to the NTC in 2014 when Broadwater took command of Operations Group. They departed Fort Irwin in August 2015 when he was tapped to be the Deputy Commanding General – Support for the 1st Armored Division.

In his prepared remarks, Broadwater expressed his pleasure at returning to the National Training Center and looked forward to serving with the Soldiers stationed here.

“To the troopers of the National Center and Fort Irwin, again, I am extremely humbled and honored to stand before you. I want to thank you for everything you’ve done and everything you will continue to do as we train the force to fight and win in a complex world. You have my pledge to continue to uphold the standards of the National Training Center and Fort Irwin as the Crown Jewel of the United States Army,” he said.

Broadwater continued “There is nothing we cannot accomplish together, and I look forward to serving alongside each and every one of you. Remember our job is not to decide where to go when our Nation calls, but to be ready to win, anywhere, and anytime we are called. Train the Force, Train to Win, Army Strong. 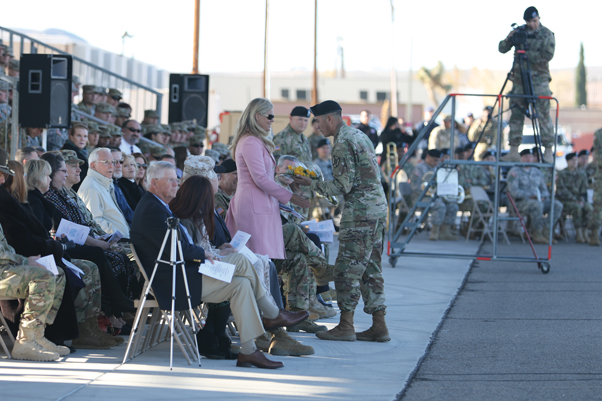