In October, the Army launched Army Ideas for Innovation, or AI2, a digital crowdsourcing program that solicits ideas for how the Army can become more innovative.

Any member of the Department of Defense community with a CAC card can participate. AI2 is located at https://www.milsuite.mil/book/community/spaces/ai2.

“AI2 provides a platform for unleashing the creativity of the force to generate innovative ideas and then implement them,” said Under Secretary of the Army and Chief Management Officer Patrick J. Murphy.

“It is a venue for Army Soldiers and Civilians to share innovative ideas and creative solutions that positively affect the Army through increased cost savings, product quality, productivity, cycle time, process improvement, and morale,” he said. 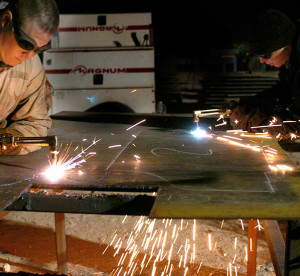 In 2007, a Soldier enlisted the aid of this Army civilian to weld some up-armor for his Humvee before up-armor kits became available. The Army Ideas for Innovation program is soliciting great ideas like this.

After taking office as the under secretary in January 2016 and traveling to Army installations across the United States, as well as to Iraq and Afghanistan, to gather feedback from Soldiers, Murphy tasked the Office of Business Transformation with the creation of AI2.

“As the chief management officer of the Army, my management philosophy is: Ideas are great. Execution is critical,” Murphy stated in October, during the Department of the Army Civilian Award Luncheon at the Association of the United States Army’s Annual Meeting.

“Therefore, I’m pleased that each of you can utilize AI2 to let me know how we can become more innovative.”

How the site works
Simply navigate to the website and post an idea, said Jennifer L. Mootz, a business strategist and innovation coordinator for the Office of Business Transformation, which is led by Murphy.

Once posted, the idea will be crowdsourced for a period of two weeks, she said. During that period, participants can add their inputs and vote up or down on the idea.

At the end of that period, the idea will go to a functional moderator at the headquarters level. For example, if the idea involves logistics, it will go to the logistics moderator. The same holds true for finance, human resources, installations, training, security, communications and other communities. But an idea can sometimes cross communities, Mootz said, and in such a case, the communities will approach the idea collaboratively.

Programs for collecting innovative ideas aren’t new, but the manner in which AI2 collects them is, she said. Its predecessor, the Army Suggestion Program, lacked the crowdsourcing option.

Now, with AI2, when ideas are forwarded to their functional communities, they are more fully vetted through comments and suggestions made by participants who visit the site, which means that approved ideas can be implemented much more rapidly.

Depending on the size and scope of the ideas, some will be more quickly implemented than others, Mootz said. For instance, an idea that requires collaboration across community lines or significant resources to execute will likely take longer to implement.

In cases in which the submitted idea is relevant primarily to a specific installation, the idea will be forwarded to the appropriate garrison commander.

An innovate Army
Mootz noted the Army’s talented Soldiers and Civilians are always innovating. During the wars in Iraq and Afghanistan, for example, some Soldiers didn’t wait for new up-armor to arrive for their unit’s vehicles. Instead, they innovated and produced their own up-armor solutions.

AI2 is just a new means of harnessing the initiative and creativity they display each day. Many volumes could be filled with other great ideas, Mootz said.

Recently, an airfield manager at Hunter Army Airfield, Fort Stewart, Ga., recommended realigning the fuel points at the petroleum, oil and lubricants facility to refuel aircraft. The change could save the Army $8.7 million, Mootz said.

A National Guard Soldier in Illinois suggested that, as a way of promoting fitness, members of the Guard not living close to military installations should be reimbursed member fees for Guard-approved local fitness facilities. The idea was adopted and even extended to their family members.

As Soldiers and civilians increasingly log onto AI2, the aim is to harness innovative ideas across the Army as rapidly as possible, so that Army leaders can support Soldiers, Civilians, and their Families, she said.

“Continuously communicate to your organization the importance of innovation to the long-term success of the Army. Reinforce that failed innovation initiatives are learning opportunities while rewarding, recognizing and sharing success.”