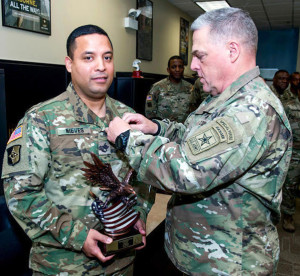 For Staff Sgt. Ernie Nieves, the Army’s top recruiter for fiscal year 2016, being a recruiter is the perfect opportunity to give back to the community.

“I treat every applicant like they are family, like my own children,” he said. “My job gives me a platform to mentor, teach and motivate them to do better for themselves and those around them.”

In fiscal year 2016 his recruiting efforts resulted in 50 enlistments. But in his free time, Nieves also mentors high-risk kids from the urban streets of Chicago. Nieves estimates he has mentored about 24 kids since 1992, but he’s not keeping score.

On weekdays, weekends and evenings, he mentors kids in schools, in their home, and in parks — anywhere and everywhere he can. All kids need some form of mentoring, he believes.

With each new generation, kids seem to him further detached from core values, self worth and overall motivation. Nieves tells his kids not to accept or engage in the violence they are exposed to on the streets. He tells them that there is a better life.

“I never give up on people,” Nieves said. “Gang and gun violence is not normal. [Violence] is not and should not be accepted. A true hero inspires change, one life at a time.”

He believes that many kids who join gangs do so because they lack role models, financial resources, or stable families. For many of them, the gang lifestyle is all they know.

Reaching out
Nieves still remembers when the ice cream trucks would come around the neighborhoods; the gang leaders would buy ice cream for all the kids in hopes of recruiting them. They made the kids feel protected, like they belonged to something much greater than themselves.

Before mentoring directly to the youths, Nieves said, he would meet with gang leaders to request that they release the youths. The meetings actually surprised some leaders, who responded positively. But as the years have passed, Nieves has found this approach is becoming more difficult.

“Most of the leaders do not have any sense of tradition, respect or value for anything or anyone,” Nieves said.

On the other side, Nieves said, he has mentored kids whose parents are barely involved in their kids’ lives.

The last protégé he mentored was homeless only six months ago. Now that recruit is in Army basic training.

Drawing on a troubled past
Nieves believes his blended family and his own experiences as a gang-involved youth allow him to relate to the youths he helps. The Puerto Rico-born NCO moved to Chicago at age 5. Several years later, his parents divorced and his father left.

“This left a huge void in my life, and I was left to fill that void with the only example of family and fatherhood I knew, the local gang members,” Nieves said.

At 9, Nieves joined a gang. Two years later, he said, gang members betrayed him and stabbed him with an ice pick in his knee. So he joined an opposing gang to which several of his family members already belonged. He claims that he became gang president at age 13.

“The entire house was shot up. Bullet holes through the door and windows,” Nieves recalled.

On the third occasion, he was hit in the foot by a ricocheting round.

At age 16, Nieves had a son, and he began having dreams of being shot while in a vehicle. In his dreams, the rounds would go through him and hit his son in the back seat. He decided it was time to leave the gang life behind.

“It was then that I decided that this was no life for my son,” he recalled. “I had to give him more.”

Nieves graduated from Chicago’s Wells Community Academy high school in 1990. After years of self-employment in real estate, he enlisted in the Army at age 31 in 2004. He joined the Army Reserve so he could stay close to his children.

“You must be able to do what you ask others to do and, finally, you have to care about those you lead,” he said. “I admire people that inspire without seeking personal attention — everyone that makes a difference in the lives of those around them.”

Nieves loves the city of Chicago and said his “heart hurts with the lack of life-changing programs.”

He heads a blended family household with eight children. He and his wife, a retired Chicago police officer, have two sons in the active Army. One is stationed at Schofield Barracks, Hawaii, and the other is a Ranger stationed at Fort Benning, Georgia. Both are serving in military intelligence.

Nieves plans to retire in about 10 years. After retirement, he said, he plans to mentor full-time. Currently, he is researching ways to create an interactive mentorship program that can serve as a template for anyone who wants to become a mentor.

“I want to have a mentorship program in every major inner city throughout the country,” he said. “I want to light a fire in as many people as possible to inspire change, one person at a time.”