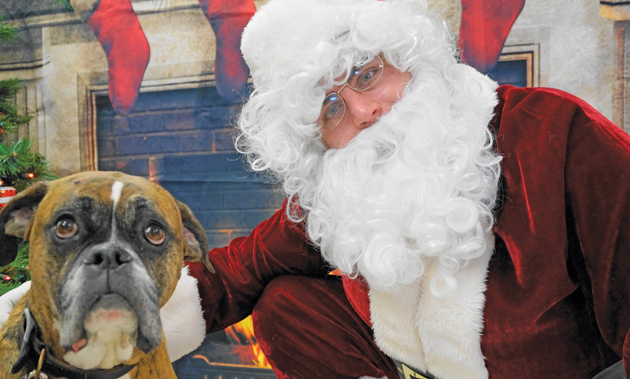 FORT IRWIN, Calif. – There was no shortage of opportunities for children of all ages to see the famous duo, Mr. and Mrs. Santa Clause, and their elves to make their holiday wishes, here, during the month of December.

From the Main Post Helipad to the Veterinary Treatment Facility, Clause was sighted around post handing out candy canes, teddy bears, and small toys to children who had the courage to sit with him.

The Christmas Tree Lighting and Holiday Market was the most popular sighting with an estimated 1,200 adults and children in attendance. The holiday event offered attendees free train rides, hot dogs and hot cocoa, and festive gifts and snacks for purchase.

The second most popular Clause sighting was the Breakfast with Santa at Five Star Catering with over 275 family members attending. Families spent time with Clause before, during, and after breakfast, giving children of all ages multiple chances to ask him for that special gift. Among the things children wished for were Monster High Dolls, video consoles and games, and cell phones.

Even the Fort Irwin pets had reason to get excited that Santa “Paws” could hear their holiday wishes. The Pet Pictures with Santa at the Fort Irwin Veterinary Treatment Facility had fur families out of the doghouse for cookies, hot cocoa, multiple backdrop options, treats, and of course, pictures with Clause. 45 pets across post posed with Clause, some even pretending to be well-behaved in order to get treats. Facebook Live streaming on the National Training Center/Fort Irwin Facebook page allowed pet lovers everywhere to tune in to the holiday cheer.

As time drew closer to block leave and Christmas Day, Clause continued his mission of ensuring to hear every Fort Irwin child’s wish by making one last stop at the helipad. Clause arrived by firetruck to the Main Post Helipad and families took pictures with Santa on a helicopter. Charlie Company, 2916th Aviation Battalion, provided hot cocoa and coffee, baked goods, and over 120 toys for attending children.