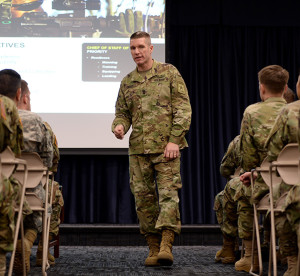 Sgt. Maj. of the Army Daniel A. Dailey listens to questions asked by public affairs NCOs during a town hall meeting at the Defense Information School at Fort George G. Meade, Md., Jan. 12, 2017. Dailey discussed incentives, such as a cash bonus, to help retain Soldiers as the Army looks to expand to a total force of over 1 million.

With the total Army tasked to expand by 28,000 troops this year, the service hopes to retain quality Soldiers with incentives, such as cash bonuses up to $10,000 for extensions, the Army’s top enlisted member said Jan. 12.

“We need Soldiers to stay in the Army,” Sgt. Maj. of the Army Daniel A. Dailey said during a town hall meeting at the Defense Information School. “If you’re on the fence [and you plan to get out this year], go see your career counselor. I guarantee you that they have some good news.”

The National Defense Authorization Act for fiscal year 2017 recently raised the Army’s end strength to just over 1 million Soldiers for all components. Initial proposals had the entire Army slated to draw down to 980,000 by the end of this year. The NDAA increased the active force by 16,000 to an end strength of 476,000 and also bumped the reserve component by 12,000.

The troop surge would represent the Army’s largest yearly increase without using a draft or stop-loss involuntary extension and will double its annual retention mission, according to Dailey.

“We’re not in a drawdown anymore; we’re in an increase situation,” he said. “The Army is going to get bigger.”

Soldiers who decide to extend their service for 12 months may receive the cash bonus, up to $10,000, depending on their military occupational specialty, time in service and re-enlistment eligibility, he added.

Choice of duty location, stabilization at duty stations, chances to extend service rather than re-enlist, and incentives such as schools are other ways the Army hopes to retain its own. Assignment and training options vary by MOS.

“There are some very creative things we’re going to do to stimulate all of that,” he said. “The important thing Soldiers need to know is to ensure they talk to their career counselors. They are the experts at the unit level who can tailor options based on a Soldier’s specific situation and MOS.”

Dailey also highlighted readiness, as the Army transitions from an emphasis on counterinsurgency to full-spectrum operations, which will require an adaptable, well-trained, and ready force. Currently, more than 180,000 Soldiers are serving in no fewer than 140 nations around the globe.

Education benefits for enlisted Soldiers are also improving, he said, with “huge systematic changes” to the NCO professional development system, ongoing reviews of common core for all career fields, and possible expansion of tuition assistance. 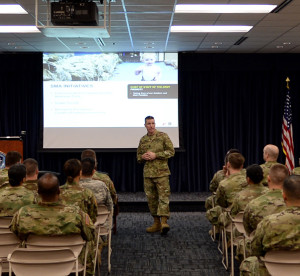 Sgt. Maj. of the Army Daniel A. Dailey answers a question asked by a public affairs NCO during a town hall meeting at the Defense Information School at Fort George G. Meade, Md., Jan. 12, 2017.

“We need to change the dynamic in how we train and educate our Soldiers,” Dailey said.

Military training, he said, can help Soldiers obtain college degrees through the Army University’s credentialing program.
Under the NDAA, Congress has authorized the Army to pay for credentials that translate to a civilian occupation as long as it relates to an MOS, a Soldier’s regular duties, and during a Soldier’s transition out of the Army.

“We have permission to pay for your credentials for the job you do in the Army,” he said. “That’s not a bad deal.”

The Credentialing Opportunities On-Line program also informs Soldiers how to use their military training toward certificates and licenses required for civilian professions, such as electrician, plumber, welder, and many other jobs.

In addition, the Army is working toward letting Soldiers use tuition assistance to pay for these certificates and licenses, Dailey said.

These efforts, he said, will allow Soldiers to thrive in the civilian sector once they leave the service.

These changes may also convince many Soldiers to keep serving or even persuade potential recruits to sign up.

“It sends a perception across America that we value people,” Dailey said. “We want to stay at a competitive level and make sure that we get the right people to join.

“It’s a reinvestment in the all-volunteer force of the future.”