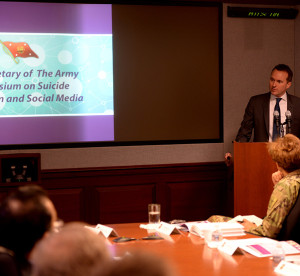 Secretary of the Army Eric Fanning speaks during the Symposium on Suicide Prevention and Social Media in the Pentagon Jan. 18, 2017.

As an Army officer in Iraq, Daniel Feehan relied on his driver to keep him safe while they traveled on dangerous missions. But once they were back on home soil, Feehan said, he failed to do the same for his driver, Spec. Sergio Betts, when Betts made a call for help.

After redeploying, Feehan recalled, they had parted ways but kept in touch on Facebook, which is how he learned that Betts had returned to Iraq again before eventually getting out of the Army. Once out, Betts’ social media presence took on a bleaker tone.

“I watched a deep and profound sadness come over him,” said Feehan, now the principal deputy assistant secretary of defense for readiness.

Then one night in September 2013, Feehan checked his Facebook and came across an ominous post by Betts, simply stating: “Lost.”

Unaware of the meaning behind the post, Feehan chose to go to bed rather than reach out to Betts. Later, he discovered that Betts, the Soldier who once kept a watchful eye on him in Iraq, had fatally shot himself.

“Call the person, message them back, offer them a helping hand. Just ask if they’re OK,” he added, choking up.

As his last public appearance as secretary of the Army, Eric Fanning hosted the symposium, addressing leaders of suicide prevention groups, researchers and social media experts from Facebook, LinkedIn, Google and Apple. In his remarks, he expressed hope the Army could reduce suicide rates with their help.

In the coming weeks, participants in the symposium are expected to offer recommendations to Army senior leaders on how they can use social media to stem suicidal thoughts and acts among Soldiers.

“It shouldn’t surprise any of us that those who experience the crucible of combat or those who spend multiple tours away from home are affected by it,” Fanning told the group. “The strains for a Soldier in combat are difficult to comprehend. They’re difficult for Soldiers themselves to explain and communicate.”

In recognition of the heightened risk Soldiers face, the Army has embedded more than 60 behavioral health teams at the brigade level, making care more accessible to Soldiers at their workplace.

“I think the message is getting out, and we’re improving,” West said at the symposium. “The incremental change we’re seeing … really is showing that we’re on the right track.”

In fiscal 2015, nearly 280 Soldiers in the Army took their own lives. In the first three quarters of fiscal 2016, there were just over 200 suicides across the Army, according to the most recent Defense Suicide Prevention Office data.

Fanning noted that more work is needed to reduce these numbers further and that measures that have been shown to be effective during the Obama administration should endure into the next.

“This is not a partisan issue,” the secretary said. “It’s not even exclusive to our military. No matter our profession or background, each of us has known someone in our community or family who needed help but for some reason didn’t get it in time.”

Noting the widespread use of social media among Soldiers, Fanning charged those in the audience to help develop ways to harness its power. Peer-reviewed research has shown certain behaviors and patterns on social media can reveal a person is in distress.

“We have to find ways social media can be a tool in [suicide] prevention,” he said.

For instance, a person who searches certain words on Google that indicate a desire to cause himself or herself harm will automatically be shown ads offering help. But that kind of search engine algorithm isn’t the Army’s only ally in suicide prevention, Fanning said. Service members who recognize the signs can be just as responsive.

“We can help make service members aware of what kind of posts or patterns of behavior should raise concern,” Fanning said. “We can make them aware of how to respond in the right way and make the right resources available to them.”

For Feehan and the many others who have lost someone close to them to suicide, any missed opportunity to help out a fellow Soldier can have a lasting negative consequence.

“It takes a lot of courage for a peer to step up and ask someone if they’re OK,” Feehan said. “But it’s part of the military culture; that is, leave no man behind.”