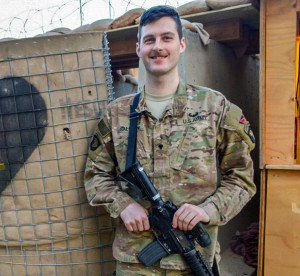 Spec. Erik Salmon, 26, an intelligence analyst assigned to the 2nd Brigade Combat Team, 101st Airborne Division, poses for a photograph while deployed in support of Operation Inherent Resolve, at Camp Swift, Jan. 8, 2017. Salmon assisted in the recovery of an isolated Iraqi Security Forces (ISF) soldier while working as a member of a U.S. and Iraqi advise and assist operations cell.

Before he enlisted, Spec. Erik Salmon was a traveler, fond of seeing new places and experiencing different cultures. Since deploying to Iraq in May 2016 with the 2nd Brigade Combat Team, 101st Airborne Division (Air Assault), the 26-year-old intelligence analyst has been confined to tiny Camp Swift, behind dirt barriers, concrete walls and concertina wire.

“For the last nine months, I’ve only spent a total of eight hours outside Swift for my buddy’s reenlistment in Erbil,” he stated. “I jumped on a convoy during my off shift. I got about four hours of sleep that night.”

Now, Salmon is just days away from returning to Fort Campbell, Kentucky.

“I’m pretty excited to leave,” the tall, slender Soldier admitted with a chuckle.

Salmon and his fellow U.S. Soldiers at Camp Swift are working alongside international coalition partners in support of the Iraq government and the Iraqi Security Forces (ISF) as they wage war against the terrorist group, the Islamic State of Iraq and the Levant.

Salmon’s own “Strike Brigade” has spent the last 270 days advising, assisting, training, and equipping the ISF as they conduct an ongoing offensive to liberate Mosul, the second-largest city in the country. Although U.S. forces are not engaging in direct combat, they provide intelligence, indirect fire support, and reconnaissance for maneuvering Iraqi forces.

During his deployment, Salmon has seen plenty of Iraq, but he has seen most of it only through the lens of the camera on an Aerosonde unmanned aerial vehicle (UAV). The UAV feeds a picture of the battle-space to a joint U.S.-Iraqi operations cell where he works.

The UAV has no weapons but provides overwatch for maneuvering ISF, reconnaissance and surveillance, as well as targeting and observation for indirect fire support.

Salmon is the liaison between the pilot and the operations cell, interpreting what he sees on the screen for intelligence gathering, a critical role for the ISF fight. Although he is living in less than ideal conditions, Salmon has appreciated the experience.

“I feel pretty fortunate to be on this deployment with the 101st,” he said. “The longer I’m here, the more I feel a sense of camaraderie with the people of the Strike Brigade. Definitely made it all worth it.”

Saving an Iraqi soldier
One night, Salmon found himself glued to the Intelligence, Surveillance, and Reconnaissance (ISR) UAV video feed. That night, he wasn’t following the enemy; he was searching for an ISF soldier who had found himself all alone, trapped in enemy-held territory.

A group of ISF had been surrounded while fighting in the urban darkness. A contingent of ISF attempted to clear a retreat route for their embattled comrades but were driven back. During the engagement, one ISF lieutenant was cut off from his unit. Around him, the enemy could be lurking anywhere.

In desperation, the Iraqi lieutenant used his cell phone to call the coalition forces in the operations cell. There, the U.S. and Iraqi Soldiers asked the lieutenant to describe his surroundings so they could pinpoint his location. Using a map, they tried to sync what they could see on the grainy UAV feed with the details the soldier provided.

Salmon said the ISF lieutenant sounded frightened as he reported he had been wounded and was surrounded. Frequently, the lieutenant would whisper, stop talking, or hang up — presumably to avoid detection. At the operations cell, the frequent interruptions made the lieutenant ‘s descriptions difficult to understand. Minutes dragged into hours as they searched for his location.

Eventually, the lieutenant was convinced to leave his position so Salmon could locate him before his cell phone battery died. They spotted him as he emerged from a small carport and dashed for concealment behind some bushes.

‘You put yourself in their situation’
During the long hours U.S. Soldiers spent on the night shifts in the operations cell, the Soldiers had bonded with their Iraqi counterparts, Salmon said. They took local meals together. On slow nights, they had passed the time with games. Gradually their camaraderie had overcome the language barrier.

Now they anxiously worked together to save their fellow soldier from capture or death.

“They’re people fighting for their country, fighting for freedom for their people, so put yourself in their situation,” said Salmon. “These people value human life. It is important to them and to us. People are generally the same everywhere.”

The operations cell had directions prepared for the ISF lieutenant. They guided him through the dark streets, using the UAV feed to help him avoid danger. However, while navigating between the buildings his progress was dangerously slow. Desperate to remove him from the enemy-held environment, the operations cell urged him to sprint.

“It was really nerve-wracking,” Salmon remembered.

Back at the operations cell, the Iraqi and U.S. Soldiers watched as the soldier raced through the darkness. Then something unknown appeared on the ISR. On edge, the entire cell froze. Everyone feared the worst. With relief, they soon realized it was only a stray horse.

As the lieutenant drew closer to friendly forces, they instructed him to hold back and seek cover in a ditch. They feared the ISF would fire into the darkness, mistaking their comrade for the enemy.

“We didn’t want this to end badly,” Salmon explained. “We had to get positive [communications] with the receiving unit to ensure he could safely proceed.”

Once they had made confirmation with ISF on the ground, someone on a rooftop took over, guiding the lieutenant to a group of Humvees, where he was received by friendly forces.

“It was a great moment,” Salmon said. “Everyone was laughing and hugging.”

In the years ahead, Salmon predicted, he may forget plenty of other aspects of the deployment, but he will never forget that night.

“It was a once in a lifetime opportunity to be directly involved with saving someone’s life,” he said.