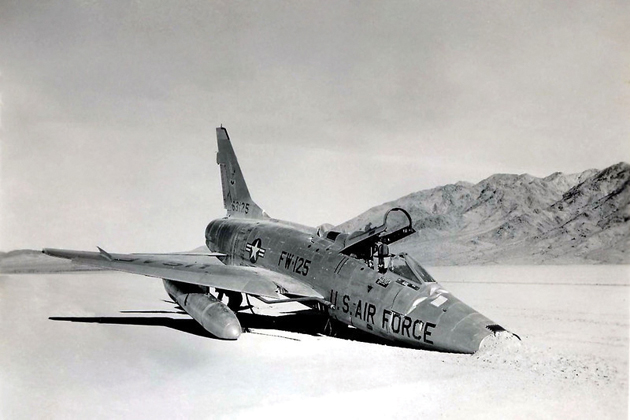 While approaching George AFB the pilots of two of the aircraft requested “direction finding steers” — a system used to guide the pilot back on course to the airfield. Unfortunately the air traffic controller gave them vectors 180 degrees off, sending them in the wrong direction.

Somewhere North of Fort Irwin they realized the error. Now critically short of fuel the pilots decided to land at Bicycle Lake Airfield on Fort Irwin.

First Lt. Douglass B. Peterson attempted to land on the dirt runway. After making his approach to the airfield, Peterson was about to touch down when he was blinded by the reflection of landing lights on the light surface of the landing strip.

The pilot of the second aircraft, Capt. Gerald R. Weiland, decided to not to attempt a landing at Bike Lake and attempted to fly to Daggett Airport.

Somewhere between Fort Irwin and Daggett, the engines on Weiland’s plane “flamed out,” the aircraft completely out of fuel. Weiland ejected safely from the doomed aircraft.

Peterson also survived the crash, but it wouldn’t be the last time he lost an aircraft.

On Sep. 10, 1966, Peterson departed for his 67th combat mission. That night his target was a bridge and ferry complex near Hanoi. After hitting his target, his aircraft was hit by a surface-to-air missile.  Badly damaged and with the tail section of the aircraft in flames, Peterson and his co-pilot ejected over enemy territory.

Peterson would end up dangling from a tree.

During the ejection and parachute landing he suffered multiple injuries. He broke his shoulder and arm, severely dislocated a knee, and suffered compression fractures of both ankles along with several cuts and bruises.

He hung from the tree for several hours until he was spotted by an enemy search party from a nearby village. He was pulled from the tree, stripped down to his boxers, bound with ropes and dragged back to the village.

He was interrogated overnight and then paraded around several villages before being taken to the “Hanoi Hilton.”

After four days of torture, he was finally given medical care, He suffered in the infamous prison for 6 ½ years before he was repatriated in 1973.

Peterson stayed in the Air Force after his release, eventually retiring in 1981 as a Col.

He was elected to the U.S. Congress as a representative from the 2nd district of Florida. He would serve three terms in the Congress, he didn’t seek a fourth term.

In 1997, Peterson would return to Vietnam, this time appointed by President Bill Clinton to be the first U.S. ambassador to Vietnam since the end of the war. He would serve in that position until 2001.