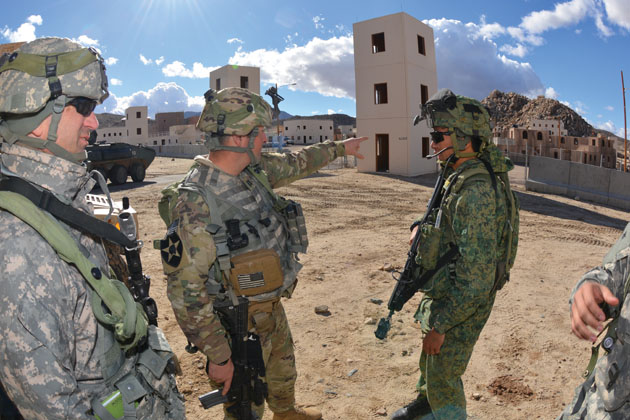 FORT IRWIN, Calif. — Slouched into the driver seat of a damaged pick-up truck, an insurgent guerrilla fighter notionally takes his last breath after a barrage of gunfire, In front of the embassy at the city of Razish.

This was the fourth attempt in 24 hours to rattle the Soldiers of Devil Coy, 5th Battalion of the Singapore Army Infantry Regiment during their crucible joint readiness training exercise at the National Training Center along with their U.S. partners, the 1st Stryker Brigade Combat Team, 25th Infantry Regiment.

The insurgent was a member of a guerrilla force that had taken refuge in Razish, one of the largest cities with well over 500 buildings in the 1,200 square miles of austere training area. The group had made the city an epicenter for conducting their operations and Capt. Ng Eng Ping, Commander of Devil Coy, was given orders to occupy the city.

“My company along with C Co., 1st Stryker Brigade Combat Team were able to secure Razish with little to no resistance, in other words we caught the enemy by surprise,” said Ping. “We occupied the embassy, library and mansion because it gave us the best military advantage point possible to provide security to the people.”

The international partners entered the city swiftly, but after occupying Razish, the enemy started to probe their defenses.

“A truck loaded with improvised explosives approached the embassy and fired a Rocket Propelled Grenade, which hit the front gate, but we were able to kill the driver before detonation,” said Ping.

Along with the constant attacks, the commander also had a growing problem with members of the community.

“The civilians weren’t too happy about the military presence, but with the assistance of the B. Co. 426th Civil Affairs Battalion they managed to help maintain a peaceful situation,” said Ping. “We’re having ongoing discussions with the civil affairs to help find out more about the city populous and insurgent group still located in the city.”

The complex training scenario and challenging environment proved to be a rewarding experience for the Soldiers of Devil Coy.

“This scenario is as real as it gets, the constant probing by the enemy keeps everyone engaged and that’s good for learning,” said Ping.

The 14 training days enhanced the interoperability between the two forces and further developed partnerships in a tough, realistic operational environment that America’s war fighters face in combat. Training at the National Training Center is relevant and quickly adaptable to emerging threats and technologies, all designed to prepare our military to win the first fight.

NCOs: The backbone of the Army