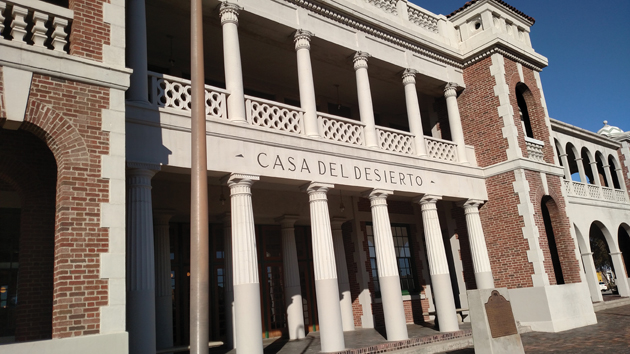 Barstow, Calif. —  Just a couple of blocks off old Route 66 in the city of Barstow, sits the historic Harvey House, one of many attractions in the area that offers a look into the past.

Long before people began to “get their kicks on route 66,” Fred Harvey created the very first chain restaurants, the Harvey Houses’.

In 1853 Harvey immigrated to the United States at the age of 15. He took a job as a dishwasher at Smith and McNeil’s restaurant in New York City, working  his way up to line cook before he left New York for New Orleans.

In New Orleans he continued to learn the restaurant business. Eventually, along with a partner, he opened up his own café in St Louis. Soon after, the Civil War broke out and his partner left to join the Confederacy, taking all the money the two had earned.

Harvey left the restaurant business and went to work for the Hannibal and Saint Joseph Railroad. Harvey worked his way up in the railroad business and eventually he was transferred to Leavenworth, Kansas. His work had him traveling extensively. He was very dissatisfied with the food and the food service available to the traveler and came up with an ambitious plan to fix the problem.

In 1876, Harvey convinced the superintendent of the Atchison Topeka and Santa Fe Railroad to allow him to set up restaurants along the railway, designed specifically to serve rail passengers. As part of the deal Harvey would not be charged rent.

Harvey opened the first restaurant in Topeka, Kansas, in 1876. His focus was on good food, excellent service and reasonable prices. He also was very particular about the cleanliness of his restaurants.

His hard work paid off, and in a few years Harvey was put in charge of all food service for the Atchison, Topeka and Santa Fe Railroad.

Eventually there would be as many as 84 Harvey House Restaurants along the rails. The restaurants became known for good food and the excellent service.

Harvey advertised in newspapers across the country for single women between the ages of 18-30 to work in his restaurants. They became known as the “Harvey Girls.” The pay was good, about $17 a month, with free room and board. About 5,000 women eventually came to work at the Harvey Houses.

The original Harvey House in Barstow was opened in 1885, but was destroyed by fire in 1908. In 1911 the current Harvey House, the “Casa del Desietro” was opened. It operated as a restaurant and hotel until 1973.

The building was purchased by the City of Barstow in 1990 and after an extensive renovation now houses several government offices, the Barstow Area Chamber of Commerce, the Route 66 “Mother Road” Museum and the Western America Railroad Museum.