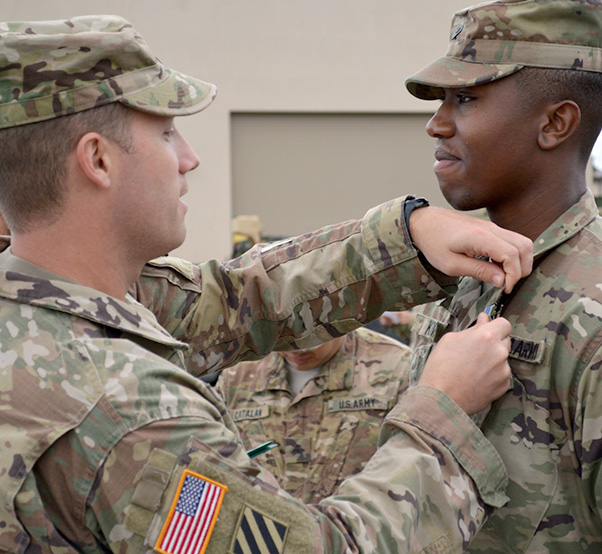 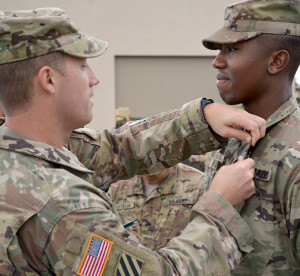 Dec. 2, 2016, was a quiet late afternoon for Kemp until he heard the pained screams from a resident outside his Wahiawa home.

Kemp said he saw a neighbor trying to free his leg from a pit bull. The man had kicked off the dog once only to have it latch back onto his leg again, tearing a large chunk of the individual’s calf.

“When I went down there, the pit bull was still running around a little bit, but a neighbor got it under control,” he said.

He then elevated the injured man’s leg against a fence, to lessen the bleeding.

“I ran across the street to my car, because we were getting ready for [Exercise] Yama Sakura. I had my [fighting load carrier] in my trunk,” he said. “I got my tourniquet out of the medic bag and ran back over, and put it on his thigh to help stop the bleeding.”

Afterward, a call was placed to 911 for emergency medical care for the severely injured civilian.

Training Saves Lives
Kemp attributed his ability to provide rapid aid to the Combat Lifesaver Course, which he first took in basic training, and a more recent refresher course.

“I feel that the average person might think to put the tourniquet right around the wound, but I always remembered high and tight,” he said, “so I went above the injury, even above the knee cap. I put it on his thigh.”

Kemp demonstrated personal courage by providing assistance and treatment to a community member that was attacked by a dog, said Army 1st Lt. Joseph Salmento, a platoon leader in Delta Company.

“Despite the dog acting aggressively and repeatedly mauling the victim, Spc. Kemp with the assistance of a bystander, proceeded to separate the dog from the victim’s leg,” Salmento said. “Then, he properly diagnosed the victim with arterial hemorrhaging in the leg and correctly applied a tourniquet to stop the bleeding. In addition, he kept the victim calm until first responders arrived. His actions saved the victim’s life.”

Kemp’s squad leader, Army Cpl. Jason Bride, said he was glad Kemp was there to help the victim by using his military training.

“He didn’t hesitate,” Bride said. “He went over there to give a civilian help, and he actually knew what to do as he was trained. He already had a good idea of how to take care of this situation. He’s a great soldier.”

A Time of Remembrance: NTC participates in Memorial Day observance