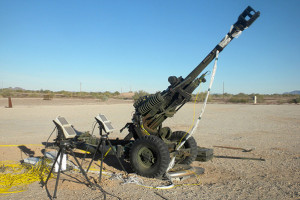 The M119 105mm howitzer, outfitted with the LBOP muzzle brake, ready for live-fire testing at the Yuma Proving Ground in Arizona.

Muzzle brake designs for large caliber have historically been for brand new cannon designs, but the LBOP was designed around the existing M119 howitzer platform.

The designs are being developed at the Armament Research, Development and Engineering Center’s Benet Laboratories at Watervliet.

The more efficiently a muzzle break redirects propellant gasses to the rear of the gun, Carson explained, the greater the reduction in the recoil.

“It is important to the warfighter because it allows them to be more lethal by sustaining higher number of rounds fired per day,” said Alan Ng, LBOP program lead, “because the blast overpressure from this new muzzle brake that is experienced by the artilleryman is significantly lower.”

The LBOP muzzle break also reduces the auditory and non-auditory health hazards — compared to the current muzzle brake on the M119, according to Carson.

The 105mm LBOP muzzle brake would be used with the M119 Towed Howitzer during shorter range howitzer missions and training.

The M119 Towed Howitzer is designed specifically for this 105 mm M20 cannon, but the technology can be engineered for other cannon platforms, such as a 155 mm.