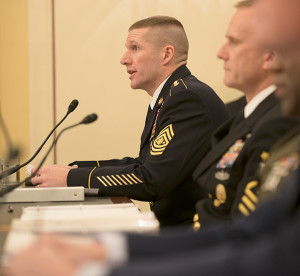 Sgt. Maj. of the Army Daniel Dailey speaks about the Army’s child care backlog while he testifies in front of the Senate Armed Forces Committee’s personnel subcommittee on Capitol Hill Feb. 14, 2017.

Access to quality child care is an essential benefit for service members with children, especially for those with spouses who work full time or are seeking employment. But with more than 5,500 children waiting to get into Army child care programs, senior leaders are worried the backlog could affect the readiness of military parents.

“This is a huge concern for us,” Sgt. Maj. of the Army Daniel Dailey told lawmakers Tuesday. Child care is “critical to our success and something we have to continue to invest in for the future.”

Speaking at a family forum at the annual Association of the United States Army conference in October, Dailey noted that child care services account for about half of the Army’s $1.1 billion budget for family programs.

Testifying before the Senate Armed Forces Committee’s personnel subcommittee on Capitol Hill, Dailey said the backlog of thousands of children is the result of several issues. The Army is in need of more child care facilities to accommodate military children, he said. Another reason he cited was the lengthy hiring process required for child care providers.

“We’re working this very hard,” he said. “I think we’ve done an OK job at reducing the amount of backlog, but it’s compounded by the simple problem that [job applicants] often don’t want to wait for those background checks, and they need to seek employment.”

The average wait time to place children into child care centers is four months, with at least five installations with wait times of five months or longer. U.S. Army Garrison-Hawaii has the longest at 16 months, according to Army officials.

A non-appropriated fund working group has been developing strategies to decrease wait time for child care. One of the strategies is the launch of MilitaryChildCare.com, a Defense Department-run website to assist military families in finding child care. After initially going online in January 2015, the website has been rolled out in phases. Today, the website provides a map showing visitors the areas it currently covers.

The Army also offsets costs for Soldiers who pay for off-base child care services when they cannot get their children into on-base facilities, Dailey said.

The DOD has even created the Extended Child Care Initiative allowing base commanders to extend the operating hours of child care centers to 14 hours a day based on needs and requirements, said Stephanie Barna, the acting assistant secretary of defense for manpower and reserve affairs.

The military, she noted in her testimony, is a young force with over 40 percent of military members with children. Because of this, the DOD has the nation’s largest employer-sponsored child care program that supports about 180,000 children each day at over 230 locations around the world. 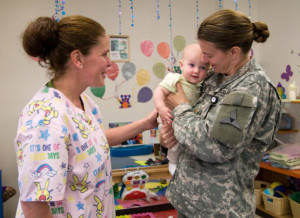 The Army is dealing with a child care backlog of over 5,500 children, which senior leaders worry could affect the readiness of military parents.

“A quality child care system helps families balance the competing demands of work and family life and contributes to the efficiency, readiness and retention of the total force,” Barna said in her written testimony.

Also in the hearing, Sen. John McCain (R-Arizona) asked Dailey and the other services’ top enlisted leaders what was being done to help more spouses get jobs.

The Armed Services Committee’s chairman said that 25 percent of military spouses are unemployed, while many of those who do have jobs are underemployed.

“Obviously, the movement of our military personnel makes it extremely difficult for spouses to hold employment in jobs,” McCain said.

Dailey told the committee that there has been success with the DOD’s Military Spouse Employment Partnership, which connects spouses to military-friendly employers. Since 2011, the program has grown to about 340 employers who have hired more than 100,000 spouses, according to his testimony.

“We need to continue to strengthen that in every way, shape or form we can,” he said, adding that there’s room for improvement on getting the word out on job opportunities and programs for spouses.

He also suggested the military can take advantage of its internal resources for military members leaving the service and offer them to spouses.

“Over the last several years, we’ve done great work in regards to finding educational and training opportunities that enhance job opportunities for our young Soldiers, Sailors, Airmen and Marines as they exit the service,” he said. “With the appropriate resourcing to these things, we can easily extend these services to our families as well.”