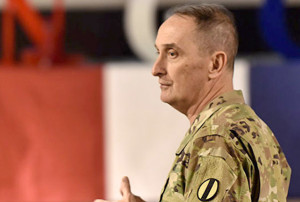 “What we are really facing right now is a moment in our history as noncommissioned officers, I think it’s revolutionary, not evolutionary, the changes we are making to our entire education system,” Command Sgt. Maj. David Davenport, said Feb. 10.

Even the name has changed, he explained, referencing the noncommissioned officer education system, or NCOES.

In his remarks, Davenport also explained the Army’s need for STEP, an acronym that stands for “select, train, educate and promote,” a relatively new Army program that he calls a “forcing function to get our NCOs to school.”

STEP is an implementation of the noncommissioned officer professional development system across the Army, in accordance with Secretary of the Army Directive 2015-31.

“A year ago, we had almost 14,000 noncommissioned officers that hadn’t been to school,” Davenport said, referring to the professional military development classes provided by the Army and required for each rank. “Of that 14,000, 4,000 were in their grade three or more years. Of that 4,000, 1,200 had been scheduled for school six or more times and didn’t go.”

Davenport discussed a multitude of changes within STEP, innovations and future programs currently in the process or already implemented by TRADOC. He cited a reworking of the structured self development courses, which are required online courses for promotion, the addition of instructor badges for wear on the uniform, and even a new service school academic evaluation report, known as the Department of the Army Form 1059.

At the end of the brief, Davenport held a candid Q&A session with attendees.

“I think it should’ve been mandatory for all NCOs to be here,” said Sgt. 1st Class Leroy A. Hunter, a noncommissioned officer assigned to the U.S. Army Europe inspector general class who attended the event. “He put out some revolutionary information that us as leaders, not only as potential students of the future, need to know so that we can take care of our Soldiers.”

Davenport invited anyone interested in learning more about these changes to read his blog at the TRADOC News Center at http://www.tradocnews.org. The blog can be found in the related links below.