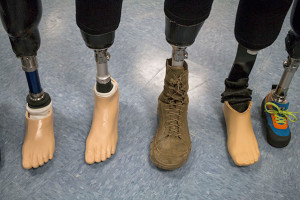 ‘The cute little baby one helps me with climbing,” said Staff Sgt. Christopher Hudec, identifying the prosthetic at the far right. Hudec has eight prosthetic legs that each do different jobs.

It’s day zero and the heat at Fort Jackson, S.C., in July is sweltering.

A group of new initial entry recruits stand at attention, forming a sea of green in their newly issued OCP uniforms as they wait with looks of anticipation on their faces for the first glance at their drill sergeant.

As Staff Sgt. Christopher Hudec makes his way over to the newest trainees ready to serve their country, the looks on their faces switch from fear of what’s to come to pure astonishment.

Just two short months ago Hudec had undergone a major surgery. As he strides toward the Soldiers on crutches, the place where his left leg is supposed to be is noticeably missing.

When his doctor suggested removing it, there was no hesitation. The only thing Hudec fears as a Soldier is failing the mission; if his leg was going to slow him down, he didn’t need it.

Hudec meets the gazes of the young Soldiers.

Head-on collision
Years after the accident, Hudec now has eight different prosthetics that he can attach to his left limb. There’s one for everything: swimming, climbing, running, etc.

“There’s all kind of stories about how I lost part of my leg. The drill sergeants will tell the trainees to be careful at a course because that’s how I lost it,” he laughs. “I never lie about what happen. I never pretend I lost it on duty.”

In November of 2012, a car pulled out unexpectedly in front of Hudec’s motorcycle. He was unable to avoid the accident.

“I heard a snap in my leg and I knew something was wrong,” he said. “I kept trying to get up, and I can hear someone say ‘Wait! He’s moving! How is he alive?'”

“I was on my motorcycle and a truck came at me in a head-on collision,” he said. “I have the same exact amputation like Hudec, just on the other side.”

The National Highway Traffic Safety Administration reported that In 2015 about 5,000 people died in motorcycle crashes, which is up 8.3 percent from 2014.

Although neither one of the Soldiers’ legs will ever be the same after the accident, they left the scene with something more important: their lives. 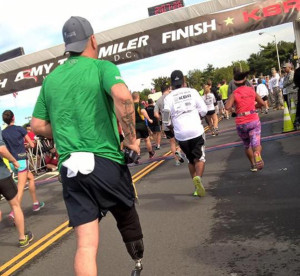 Sgt. 1st Class Kenneth Keith completing the Army 10 Miler in Washington, D.C., 11 months after amputation. ‘It’s a disability ,but I’m not disabled.’ said Keith. ‘My goal is to do whatever I can do to stay active duty.’

Not disabled
Despite their amputations, Hudec and Keith still live active lifestyles. Hudec participated in the Spartan Trifecta and Keith ran in the Army 10-miler.

“It’s a disability, but I’m not disabled,” Keith said. “My goal is to do whatever I can do to stay active duty.”

About two million people in the U.S. are living with limb loss, according to the Amputee Coalition of America.

Watching Hudec sprint past him during a PT test motivated Staff Sgt. Darwin Zapata to push himself even further.

“If he can do it with one leg, then why can’t I do it with two?” Zapata said. “I definitely pushed myself harder seeing him out there. He’s a big motivation.”

Hudec, who still kicks his left leg out when he’s riding his motorcycle, said he’s never let his disability hold him back, and he likes that he’s someone who motivates others to push harder.