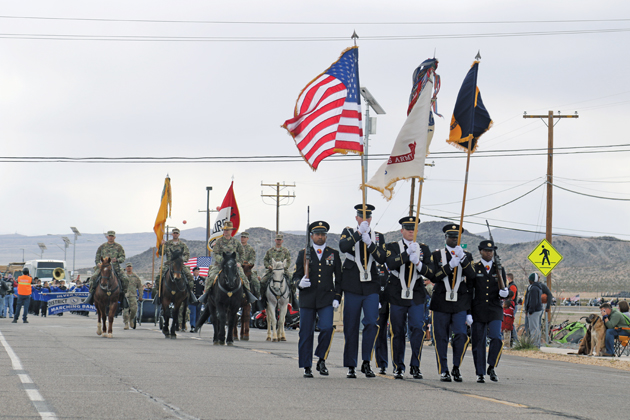 The event, first held in 2009, brings hundreds of Veterans, their families and community members to the remote desert base each year to honor the Veterans of the Vietnam War.

This year’s event started out in the early morning hours as over 600 motorcycles, off-road vehicles and classic cars gathered in Barstow for the 35 mile ride to the base.

About a half-mile from the event site, they took their place in a parade that featured a color guard from the 916th Support Brigade, the 11th Armored Cavalry Horse Detachment, the Silver Valley High School Marching Band and hundreds of Vietnam Vets riding in Light Military Transport Vehicles for a parade past the NTC Headquarters.

After the parade, the post hosted a luncheon for the Veterans at Army Field. Guest speaker for the luncheon was Lt. Gen. H.G. “Pete” Taylor. Taylor served two combat tours in Vietnam and was the 4th commander of The National Training Center in the 1980s.

In his prepared remarks, he talked about the welcome home events held to honor Vietnam Veterans.

“These ceremonies are being conducted in various ways across our country, ranging from large formations like this one today, which is amazing, to simple pining ceremonies in VFW or American Legion Halls. I’ve had the privilege of participating in many of these, each unique in their own way,” he said.

Taylor reflected on his 33 years of service and the changes that have taken place along the way.

He spoke about the bond between service members who have participated in all of our Nation’s Wars calling it “unbreakable.”

He mentioned the discussions taking place between veterans and the active duty Soldiers at the event. He pointed out how we can learn from the experiences of the past generations by listening to our veterans.

“Similar discussions have gone on after every war in our Nation’s history and has allowed us to make advances in our equipment, how we are organized, how we train and how we fight,” he said. “The National Training Center, where we are located today, is a prime example of how lessons learned from Vietnam brought about a historic change in how we train, while force on force exercises have been conducted for many years, the realism and fidelity of the National Training Center, “Red Flag” and “Top Gun” models revolutionized Military training, and were a direct result of the lessons learned in Vietnam.”

For the National Training Center and Fort Irwin commanding general, Brig. Gen. Jeff Broadwater, this was not his first Welcome Home Ceremony at the NTC.

“I was fortunate enough to be here in 2009, said Broadwater. “It was a little smaller crowd I can’t remember exactly how many we had at that time, it continues to grow.”

“I think it’s great anytime you can say thank-you to individuals who have served our country so proudly,” he said. “What’s neat about it is you have all our heroes today that continue to serve our country, coming out today to pay tribute to their (Vietnam Veterans) service.”

At the end of the ceremony, each of the Veterans received a commemorative pin and challenge coin in honor their service in Vietnam over 50 years ago.