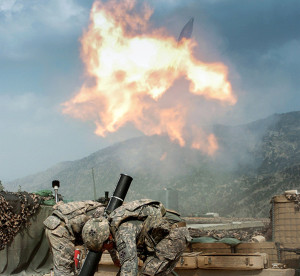 The Army has closed its initial solicitation phase for designs to create a next generation precision mortar that will allow Soldiers to put their rounds on target with extreme accuracy.

The 120 mm high explosive guided mortar, or HEGM program, is intended to replace the current precision-guided HE mortar, the accelerated precision mortar initiative or APMI.

The solicitation period, which ended Jan. 27, sought feasible designs from the private sector to create a new “smart” mortar.
While the HEGM round will incorporate state-of-the-art technology, the new round is intended to be a different design than APMI.

“The APMI solution was a tremendous asset for our Soldiers in Afghanistan,” explained Lt. Col. Anthony Gibbs of Product Manager Guided Precision Munitions and Mortar Systems, which is part of the Program Executive Office Ammunition at Picatinny Arsenal, N.J.

“It filled their urgent need for a responsive precision mortar at widely dispersed combat outposts, and is available for our global response force today,” he continued. “We’re going to improve upon the existing technology and incorporate next-generation upgrades into HEGM, such as increased threat countermeasures and enhanced maneuverability.”

The Army plans to award multiple contracts later this fiscal year. Companies that receive contracts will then create and deliver potential HEGM solutions for the U.S. government to test. A full and open competition will be conducted in 2018 to select the final solution.

“We received multiple proposals, and we’ve seen a lot of industry interest in the HEGM requirements,” Gibbs said.

Precision mortars are necessary when Soldiers can’t afford for the first mortar round to be off target, such as in an urban environment where civilians could get hurt or buildings destroyed.

“Precision allows mortars to be used in areas where typically collateral damage concerns would prevent them from being used, so it keeps an asset in the fight,” Gibbs explained.

If mortar fire cannot be used because the risk of collateral damage is too high, infantry troops will be sent on foot to engage opponents with direct-fire weapons, which exposes them to harm.

Precision guided mortars also reduce the logistical burden for troops, because Soldiers don’t need to lug as many rounds to the fight. Instead of firing large quantities of HE rounds, troops can fire one precision-guided round and eliminate the target, so their resupply needs are reduced.

“Instead of Soldiers having to fire two or three rounds to get effects, we can achieve effects with one,” said Maj. Kenneth Fowler, HEGM assistant product manager. “This reduces required logistical support, which means less fatigue for Soldiers over time, and you can engage a wider array of targets.”

Improvements
Like its predecessor, HEGM will be an all-terrain, all-weather mortar capable of incapacitating personnel within or behind structural barriers or light-skinned vehicles, as well as troops in the open, while minimizing collateral damage. It will be compatible with all U.S. 120 mm mortar weapons and fire-control systems in infantry, armored, and Stryker brigade combat teams.

However, the HEGM will be more accurate and maneuverable than APMI.

The APMI cartridge has a requirement of 10 meters CEP, or circular error probable, a requirement meaning that, if you drew a circle around a target at 10 meters radius, the round would fall inside the circle 50 percent of the time.

But Gibbs said the program is looking to exceed this requirement. The HEGM program’s objective is to create a round so accurate that it has a CEP of less than 1 meter.

Many of HEGM’s enhancements will come from the requirement that it contain a semi-active laser, or SAL, an independent targeting mode that employs laser designation, giving the mortar dual means to guide it to the intended target. It will provide the round with increased accuracy by directing it to its target via a laser beam. (APMI is GPS-guided.)

Because the laser guides the round to the physical target instead of a GPS location, the mortar will have the potential to correct course in flight to hit a target that has moved.

“The increased maneuverability will allow Soldiers to engage targets that may have moved or repositioned since the time the call for fire occurred,” Gibbs said. “If the target has moved, you can still hit it if the laser has designated it.”

While HEGM is still in the preliminary design stage, the program expects production to begin in fiscal year 2021. The program plans to acquire approximately 14,000 HEGM rounds.

The program is leveraging government expertise from the Armament Research, Development and Engineering Center at Picatinny Arsenal, as well as the Project Manager Soldier Sensors and Lasers at PEO Solider at Fort Belvoir, Va.