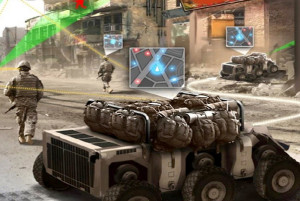 The battlefield of the future is closer than some may think. By 2025, the Army sees ground troops conducting foot patrols in urban terrain with robots, called Squad Multipurpose Equipment Transport vehicles, that carry rucksacks and other equipment alongside Soldiers. Overhead, unmanned aircraft will also serve as spotters to warn troops so they can engage the enemy on their own terms, according to the Army’s new strategy on robotic and autonomous systems.

Swarms of robots scouring enemy terrain ahead of ground troops outfitted in high-tech exoskeleton suits are among the many ideas proposed in the Army’s new strategy on robotic and autonomous systems.

In the not too distant future, Army leaders believe, war will be far more complex, calling upon Soldiers to engage enemies in multiple domains simultaneously. The 30-page strategy, which was released Wednesday, outlines five objectives to guide the technology that will ensure those Soldiers can survive and succeed in such an environment.

Whether the emerging technologies in question are operated by humans or entirely autonomous, the strategy’s purpose is to consider how they will translate into real-world capabilities like increasing a Soldier’s situational awareness, lightening physical and cognitive workloads, sustaining forces, facilitating movement and protecting Soldiers.

“As we look at our increasingly complex world, there’s no doubt that robotics, autonomous systems and artificial intelligence will play a role,” said Lt. Gen. Kevin Mangum, the deputy commander for Army Training and Doctrine Command. “We in the Army, and particularly at [TRADOC], need to get our arms around what’s in the realm of the possible.”

Speaking at TRADOC’s Mad Scientist conference on robotics, artificial intelligence and autonomy, Mangum said Tuesday he hoped to learn more from industry partners and those in the scientific community about how the Army might fight in the future.

With the increasing sophistication of cyber and unmanned systems along with the expectation that fighting in the future will occur more often in densely populated urban areas, the Army has been refining its multi-domain battle concept after officially rolling it out in October.

“We feel that we’re going to be contested in every domain,” Mangum said at the conference, which is intended to spark dialogue on technology innovation between the military, academia and industry. “That’s why this session is so timely to talk about what the challenges and, more importantly, what the opportunities are for us to be able to operate in that space.”

The battlefield of the future is closer than some may think. According to the strategy, the Army envisions that, by 2025, ground troops will conduct foot patrols in with robots called “squad multipurpose equipment transport vehicles” that carry rucksacks and other equipment. Overhead, unmanned aircraft will serve as spotters to warn troops of nearby enemy forces.

In the coming years, with commercial research and investments in science and technology, the Army may see even more science-fiction-type technology, with the strategy predicting autonomous systems being fully integrated into the force by 2040.

Another idea the Army is considering is a “warrior suit” that Soldiers can wear in combat, an exoskeleton equipped with computerized technology that can provide intelligence updates as well as integrate indirect and direct-fire weapons systems.

Small robots could also be used for reconnaissance to increase situational awareness, while unmanned aerial systems deliver cargo to improve sustainment and reduce the reliance on manned rotary-wing support, the strategy notes.

But the Army will also need to invest in robust communications and network systems that allow autonomous systems to talk to each other.

“This is not just about robots, it’s about a lot of other things,” said Augustus Fountain, deputy chief scientist for the Office of the Deputy Assistant Secretary of the Army. “We need to think about autonomy as a much more holistic view and fashion.”

Coding and new algorithms also lack funding, and although they may not be “very sexy” they are still required to make robots move. “You can have the slickest platform in the world, but if you don’t have the right algorithms, it’s not going to work,” Fountain said, speaking at the Mad Scientist event.

The two-day conference, he added, should help Army scientists gain more insight from other experts on the potential impacts and capabilities of new technology.

“Scientists are great at developing technology, but sometimes we need the assistance of a larger community to understand what those second and third order impacts are,” he said. “We need your help in envisioning the role of robotics and artificial intelligence in the future.”

A major component of incorporating the new technology will be software, said Robert Sadowski, a chief roboticist at the Army’s Tank Automotive Research, Development and Engineering Center, or TARDEC.

“What I really want to be able to do is build the app store for robots and autonomous systems,” he said.

Such an app store, he noted, could deliver software updates into the hands of Soldiers much quicker. The store would be based on the Robotic Operating System, a collection of software frameworks for robot software development.

No matter how much technology evolves, there will always be room for Soldiers, he said. Leader-follower vehicles that the Army is currently testing to conduct autonomous convoys, for example, would still need troops to keep them out of enemy hands.

“We’re not going to do these things totally autonomously,” Sadowski said. “We’re always going to have Soldiers involved in the process. You don’t put treasure on the road without some sort of security.”

Humans would also remain in charge of any lethality decision behind other autonomous systems operating in combat. “We’re not going to have unmanned Terminator robots roaming around on the battlefield,” he said.