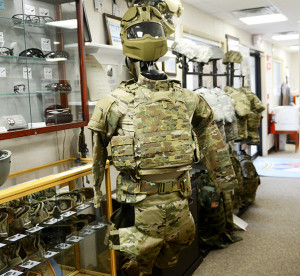 The Torso and Extremity Protection System” or TEP, under development now at Program Executive Office Soldier, sheds about five pounds of weight from the IOTV, and also adds a wide degree of scalability that commanders can make use of depending on threat level and mission.

The average generation II improved outer tactical vest weighs about 26 pounds. But the new torso and extremity protection system, or TEP, under development now at Program Executive Office Soldier, sheds about five pounds of weight and also adds a wide degree of scalability that commanders can make use of depending on threat level and mission.

The TEP is part of the new Soldier Protection System under development now at PEO Soldier. The SPS includes both the TEP and the integrated head protection system.

Range of options
The TEP can replace the IOTV, at less weight and greater scalability, depending on the mission. It includes the modular scalable vest, the ballistic combat shirt, the blast pelvic protection system, and a battle belt, which is aimed at getting weight off a Soldier’s shoulders and onto the hips.

With the TEP, commanders can require Soldiers to go with full protection — which provides the same level of protection as a fully-loaded IOTV — or go all the way down to wearing soft armor under their uniforms for missions that require less protection.

“It’s about giving commanders on the battlefield the ability to use the modularity capability of the equipment to fit their particular mission profile or protective posture level,” said Lt. Col. Kathy Brown, the product manager for Personal Protective Equipment at PEO Soldier, Fort Belvoir, Virginia.

Ballistic combat shirt
The IOTV sometimes required Soldiers to wear the deltoid auxiliary protection — cumbersome parts that snapped on to the IOTV and protected their shoulders. Soldiers might have also been asked to wear the smaller, easily-lost collars that also snapped on to the IOTV. Both are gone with the TEP. They’ve been replaced by the ballistic combat shirt, which is a shirt with breathable fabric and which also includes those smaller ballistic protection parts built in. Soldiers would wear the BCS under the TEP’s modular scalable vest.

“We have tested it,” Brown said of the ballistic combat shirt. “Soldiers like it. There is 95 percent Soldier acceptability of it. What we are working on now is tweaking the sizes.”

New pelvic protection
The TEP also includes the blast pelvic protection system, which is designed to protect a Soldiers thighs and groin against ballistic threats and burns. The BPPS is meant to replace the current combination of the pelvic undergarment and the pelvic outer-garment, or “PUG” and “POG.” The PUG has sometimes been referred to as “ballistic underwear.”

Brown said the BPPS “provides the same level of protection” as the PUG and POG combined, including both burn and fragment protection. She said Soldiers have reported that it feels more like it is “part of the pants.”

Belt takes loaf of shoulders
The battle belt included with the TEP is part of a weight management system, but it also offers some protection as well.
“It’s designed to remove the weight from your shoulders and put it on your hips,” Brown said. Whereas Soldiers might strap a radio or other gear onto their IOTV in the past, the battle belt can now take that gear and move the weight onto a Soldier’s hips.

Brown said that after successful ballistic testing, production of the TEP will begin in probably May of this year, and that Soldiers could see it in 2018 or 2019.

New helmet
Another part of the Soldier Protection System is the integrated head protection system, or IHPS. In its full configuration, it looks similar to a motorcycle helmet.

The IHPS consists of a base helmet, similar to the polyethylene enhanced combat helmet that some Soldiers are already wearing. The IHPS also includes add-ons for the base helmet, including a visor, a “mandible” portion that protects the lower jaw, and a “ballistic applique” that is much like a protective layer that attaches over the base helmet. The complete ensemble is known as the “high threat configuration.”

Brown said that eventually all deploying Soldiers will get the IHPS with the base helmet, which is the standard configuration. Other Soldiers, vehicle gunners in particular, will also get the mandible portion and the ballistic applique as well, known as the turret configuration.

New sunglasses
The visor portion on the IHPS provides ballistic protection to a Soldier’s face but doesn’t provide any protection against the sun. So Soldiers wearing it will need to wear darkened sunglasses underneath the visor if they are in bright environments.

Maj. Jaun F. Carleton, also with PEO Solider, had a pair of new sunglasses that are authorized for use by Soldiers if they want to buy them, or if their commanders buy them for them.

Brown said the goggles will be available for units to be able to requisition as part of the Soldier Protection System.
“If we are able to drive the price down, the Army could eventually make a decision to include that on the list of items that we carry for deploying Soldiers,” Brown said.

Soldier testing
Brown said the IHPS will likely be available to deploying Soldiers sometime between 2020 and 2021.

“We had a massive scale of Soldiers to evaluate the equipment, usually over a three-week to month-long timeframe, where they would perform their different mission sets, where they will execute basic rifle marksmanship, and ruck marches,” she said.

Afterward, she said, those same Soldiers were asked what they think of the gear through a qualitative evaluation methodology (Soldier survey).

“They would give us the good, the bad, the ugly,” Brown said. “It’s extremely important to get Soldiers’ input. First, Soldiers are brutally honest and they are going to tell you exactly how they feel about the equipment. Second, why buy equipment Soldiers won’t wear? And third, who’s better to give us the best answer about how the kit should be designed than the Soldier who will actually wear the equipment?”