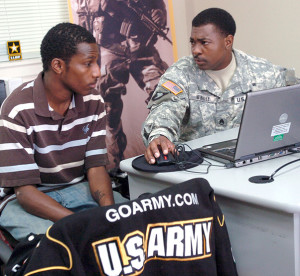 Staff Sgt. Roger L. Whaley speaks with Phillip McDonald about the possibility of becoming a journalist or X-ray technician for the Army at the U.S. Army Recruiting Station in Radcliff, Ky.

To make mission this year, the Army is offering a total of $200 million in enlistment incentive bonuses for “future Soldiers” heading to Military Occupational Specialties that especially need to be filled, Martin said. The bonuses took effect Jan. 26, and the total amount offered is the largest in five years.

As a result of the 2017 National Defense Appropriation Act, the number of new recruits required to fill active end strength has jumped from 62,500 to 68,500.

All that increase has to be attained by the end of September, which is the end of the fiscal year, she added.

While the bonuses will likely be a factor in a young person’s decision to enlist, Martin said the heavy lifting will still be done by recruiters pounding the pavement, speaking to prospects, parents, school faculty and others.

“The challenge will be for recruiters to go out and find those young men and women,” Martin said, adding that “they do exist.”

The problem with today’s youth is that so many lead a sedentary life and are obese, she said, noting that three in 10 cannot meet the minimum Army weight standards.

Martin said she hopes veterans and community leaders will go out into the schools and encourage administrators not to cut physical education from their required curriculum and to offer healthier food choices on the school menu.

She also hopes these unofficial ambassadors for the Army will mention the many benefits of joining the Army and the importance of serving their country.

Not lowering standards
Despite many young people not meeting the fitness threshold required, the Army will not lower its standards, Martin said. In fact, with the introduction of the Occupational Physical Assessment Test, or OPAT, in January, all recruits now have to pass a rigorous physical test that determines which, if any, military occupational specialty the future Soldiers will be eligible for.

Thus far, the OPAT hasn’t had a noticeable impact on the success of the recruiting mission, Martin said.

In fact, Martin said she welcomes the institution of the OPAT because it will help determine if the right people will be in the right jobs. That could lower the attrition rates in basic and follow-on training for jobs with high physical demands.

The OPAT could also impact retention and readiness in a good way because, if the right people are in the right job, that should help lower the stress levels and injury rates later on, according to Martin.

U.S. economy a factor
There are other challenges for recruiting. For instance, the overall economy has been improving, Martin said. While that’s good for the U.S., it doesn’t necessarily translate into good news for the recruiting mission.

Besides that, a number of states have increased the minimum wage to levels of basic pay that new Soldiers receive, she pointed out. As more states increase the minimum wage, more recruiters may find it harder to sell a career as a Soldier to their young prospects.

With all of these challenges, Martin said she’s particularly concerned about the welfare and well-being of the hard-working recruiters and their families.

“Every leader in U.S. Army Recruiting Command is charged with ensuring Soldiers and their families have balance and predictability in their lives and that not too much strain is placed on them.”

She added that “it will be a tough mission but not one that we cannot accomplish together.”