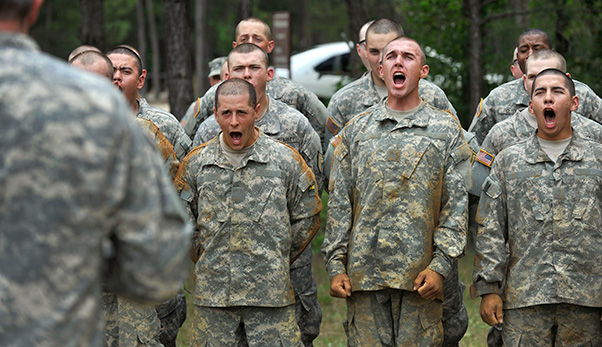 Army recruits in basic training deliver a call shortly after running an obstacle course on Fort Benning, Ga., May 4, 2012. The Army is allowing two-year enlistments for select military occupational specialties.

The Army now has two-year enlistment options for 91 military occupational specialties as a new incentive to offer prospects interested in joining its ranks.

The traditional options for enlisting for three, four, five and six years remain in place, according to Brian Sutton, a U.S. Army Recruiting Command spokesman.

Soldiers who opt for the two-year plan and are found eligible will do two years of active duty, followed by two years in the Reserve and then four years in the Inactive Ready Reserve, he said.

Maj. Gen. Jeffrey Snow, commander of USAREC, said:
“We believe this shorter enlistment opportunity will appeal to young men and women who want to take some time off between high school and college. It allows us to demonstrate to them in a short period of time that the Army is about much more than a job. It’s about experience, education and leadership.”

Snow added: “From a different perspective, shorter enlistments allow us to put more veterans back into society, which we see as a positive. The veteran population is shrinking, which is a problem for us because veterans play a key role in telling the Army story and encouraging young people to consider service.”