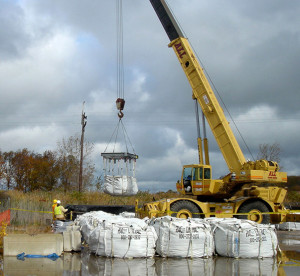 The Army Corps of Engineers has made “significant progress” in the cleanup of chemicals, toxins, radiation and other types of pollution at 5,357 sites across the United States, according to Lt. General Todd T. Semonite.

Of those total sites, 3,513 are now either closed or in a “monitoring status,” said Semonite, the corps’ commanding general and chief of engineers. He testified Wednesday at a Senate Committee on Environment and Public Works hearing titled: “Cleaning Up Our Nation’s Cold War Legacy Sites.”

Of those 5,357 sites, the Corps has achieved “response complete” of about 65 percent of Formerly Used Defense Sites, or FUDS, and about 20 percent of Formerly Utilized Sites Remedial Action Program, or FUSRAP, he said, noting that the highest risk areas are addressed on a priority basis.

Asked if additional funding would expedite even more cleanup, Semonite replied in the affirmative, adding that the Corps continuously looks for ways to make its cleanup more efficient and cost-effective.

An example of greater cost-savings and efficiencies, he said, was in fielding the Advanced Geophysical Classification technology at multiple Military Munitions Response Program sites to allow improved discrimination between hazardous unexploded ordnance and harmless scrap metal, without the need to dig up every object.

FUDS, FUSRAP explained
The Corps is involved in four cleanup programs. In his remarks, Semonite explained each of them.

First, as part of the Defense Environmental Restoration Program, the Department of Defense has delegated responsibility to the Army for the FUDS Program. These sites were used by the Defense Department for training, weapons manufacturing and weapons testing.

Some FUDS sites date back to the world wars, he said. For instance, there’s a beach in Hawaii that Marines once used to practice landings just prior to the landings on Iwo Jima. That beach is a FUDS site.

The second Corps-run program, FUSRAP, differs from FUDS in that it specifically addresses environmental remediation or control of sites where activities by the Manhattan Engineer District or Atomic Energy Commission were performed during the 1940s, 1950s and 1960s. In 1997, Congress transferred FUSRAP cleanup responsibilities from the Department of Energy to the Corps.

Fourth, the Corps also supports the Army and Air Force in cleaning up sites on active installations and provides a wide variety of environmental remediation support and technical advice to a number of other federal partners at sites across the country.

Well-intentioned
People in the 1930s and 1940s were just as committed to making a better America as people are today, Semonite said. “But at the time they didn’t understand second- and third-order ramifications of what they’d done environmentally.”

He concluded: “The Corps is dedicated to protecting human health and the environment by investigating and, if required, cleaning up contamination and munitions hazards that may remain on these properties.”

The great progress made in cleaning up such sites can be attributed to the hard work of the Corps’ 3,400 engineers, he continued, adding that he would “pit his engineers up against any” in terms of their “technical expertise and compassion.”