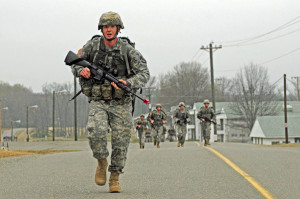 The Army is looking to have an Expert Action Badge, similar to the Expert Infantryman Badge and Expert Field Medical Badge, that would allow Soldiers to validate their skills and boost readiness across the force. Some of the requirements in the competition could include a 12-mile foot march to be finished under three hours while carrying a load of 35 pounds; a physical fitness test with 80 percent in each category in their respective age group; and being able to locate three out of four land navigation points within two hours.

While tackling concerns about the Expert Action Badge, senior enlisted leaders stressed Thursday in a virtual town hall that the goal of the badge is to enhance readiness, not discount the efforts of infantrymen or medics with similar skill badges.

If approved, Soldiers would compete in 30-plus warrior tasks and battle drills, as well as up to five mental tasks, for a chance to wear the badge on their uniforms, like the Expert Infantryman Badge or Expert Field Medical Badge.

“It’s not an ‘everybody action badge’ or everybody gets it,” said Command Sgt. Maj. Michael Gragg, with the Center for Initial Military Training. “You’re going to have to work your butt off to get this badge and when you get it you’ll be proud of it because you’ve had demonstrated exceptional performance.”

While infantrymen have had a badge to validate their skills since 1945 and medics started theirs in 1965, Gragg said, the EAB would give the other 75 percent of Soldiers the opportunity to earn one.

Today’s Soldiers have also been lagging behind in their basic skills, which could affect mission readiness, he said.

“The reason behind it is that right now our Soldiers aren’t necessarily proficient at warrior tasks and battle drills,” he said during the town hall, hosted by the Army Training and Doctrine Command.

He added the Soldier’s Creed starts off saying that those in the Army are “trained and proficient” in those skills. “All I’m asking you to do is to show it,” he said. “That’s all it is.”

Still in the conceptual phase, more than 50 Soldiers are taking part in testing the EAB idea at Joint Base Lewis-McChord, Wash.

Some of the requirements for Soldiers may include a 12-mile foot march to be finished under three hours while carrying a load of 35 pounds; a physical fitness test with 80 percent in each category in their respective age group; and being able to locate three out of four land navigation points within two hours.

Shotgun and AK-47 rifle skills could also be part of the challenge. If a Soldier were to receive two “no-gos” on an event, their testing would end.

“As you can see this is not a given, you’ll have to earn it,” said Command Sgt. Maj. David S. Davenport, the top enlisted advisor for TRADOC.

Davenport previously told reporters that if signed off on, Soldiers could start seeing the EAB by October 2019.

But some Soldiers, particularly those in the infantry, have expressed dismay in rolling out such a badge.

Gragg asked them to look at the logic of the Army having this type of badge. “We’re not trying to cheapen anything,” he said of the EIB and EFMB. “What we’re trying to do is enhance the Army. We’re trying to increase Soldier readiness.”

Davenport added: “It’s not a competition; it’s not to say that one has more value than the other.”

Enlisted leaders hope the badge will lead NCOs to rediscovering a culture of training their Soldiers. The assumption, Gragg said, is that the competition would cause Soldiers to do more training at their home station as they prepare for it.

Another badge is also under consideration, this time for platoon sergeants who frequently lead up to 150 Soldiers going through advanced individual training.

In 2008, the Army removed drill sergeants in AIT environments, and with that came the loss of a drill sergeant badge and special pay for those in charge of troops.

“We have a challenge in meeting and maintaining AIT platoon sergeants in the force with the numbers that we need,” Gragg said. “Often times, it’s because individuals have no desire to come out and do it because there’s nothing in it for them.”

That could all change if the Army goes back to AIT drill sergeants, which is expected to occur October 2019. “The goal is to get them back,” he said. “It’s a matter of us getting the money in place and making it happen.”