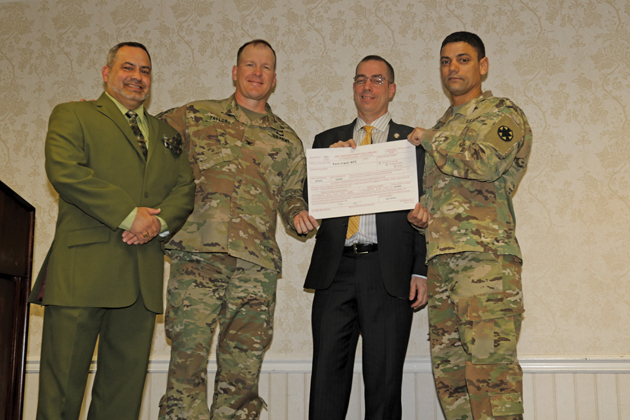 Fort Irwin senior leaders gathered during breakfast to launch the annual Army Emergency Relief (AER) campaign and to spread awareness on the important topic of giving back, March 13.

During the function, Soldiers from various units spoke on personal experiences of being struck with financial emergency situations and how Army Emergency Relief filled the gap, providing them with assistance.

Such as, Staff Sgt. Andrea Hamilton with Dental Clinic Command, who was stationed in Hawaii when her youngest brother suffered a massive heart attack.

“My first thought was getting back to my family,” said Hamilton “I had some money in my savings, but not enough to fly home from Hawaii.”

Army Emergency Relief provided Hamilton with enough financial assistance to spend time with her family during their life changing experience.

Numerous examples were voiced on how AER directly impact Soldiers and families, stories of family emergencies, mortgage payments and even unique cases like a service dog.

Command Sgt. Maj. Edison Rebuck, NTC Command Sergeant Major, spoke on a family who had a child with autistic challenges.

He recounted Spc. Candace Johnson, who reached her breaking point when she awoke one morning in the frigid winter temperatures of Fort Drum, N.Y. That morning, her front door was found open and her son was found in four feet of snow.

“This was one of many incidences involving her son and thanks in part to AER, Johnson received a service dog to help insure that their son would never be found in that capacity again,” said Rebuck “Giving is part of our profession, it’s part of being a good leader and I ask all of you to act on faith and believe that AER will give on your behalf to allow our Soldiers to live up to their full potential.”

For 75 years Army Emergency Relief has been the conduit for Soldiers helping Soldiers. Last year, AER provided $54 Million in assistance to more than 1,100 wounded Soldiers and over 36,000 Soldiers and families.

The AER campaign runs from March 1 – May 15 and contributing is simple, visit: https://www.aerhq.org/Donate or contact your unit representative today.