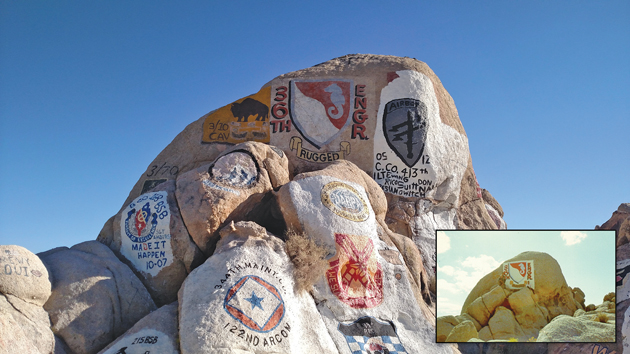 Every morning, hundreds of Fort Irwin community members drive past the famous “Painted Rocks” that sit just outside of the installations front gate.

Most people know that the distinctive unit insignia represents the units that have completed training rotations at the National Training Center. However, not everyone knows how the tradition started, and that not all the units represented there were here for NTC rotations.

Fort Irwin has been a military installation since it became the Mojave Anti-Aircraft Range in 1940. The Soldiers that trained here for World War II and the Korean War never considered painting their distinctive unit crest on the large rocks around the post.

In the mid 1960’s Col. JC Osborne, commander of Fort Irwin, came across an old Arrastre, an ore crushing device from the days of mining in the Mojave Desert. The commander had the 36th Engineer Battalion move the device and rebuild it in the park across from the officers club.

It took a couple of tries, but the 36th finally managed to create a concrete donkey that was acceptable to the commander.

They had a big dedication celebration, complete with honored guests, speeches and even an Army band.

Not long after, an artillery unit departing for Vietnam decided to use the cover of darkness to repaint the donkey their branch colors. Needless to say, people were pretty surprised to find a bright red donkey in the park the next morning. The donkey was immediately repainted gray.

Not to be outdone, every unit that departed for Vietnam found a way to repaint the donkey to show that they had been at Fort Irwin. It happened so often, it caused a shortage of gray paint on the post.

When it was time for the 36th to ship out to Vietnam in 1967, instead of defacing a donkey they considered their own, they painted the Seahorse Patch of the 36th Engineers on the rocks near the front gate. As for the donkey, according to the commander of the 36th, he volunteered to go with the unit and showed up in a connex when they arrived in country.

To this day, units that complete a training rotation can request to add their own distinctive patch to the Painted Rocks. If you look as you drive south on Fort Irwin Road, you can still see the Seahorse of the 36th Engineers surrounded by the patches of units of today.

NCOs: The backbone of the Army