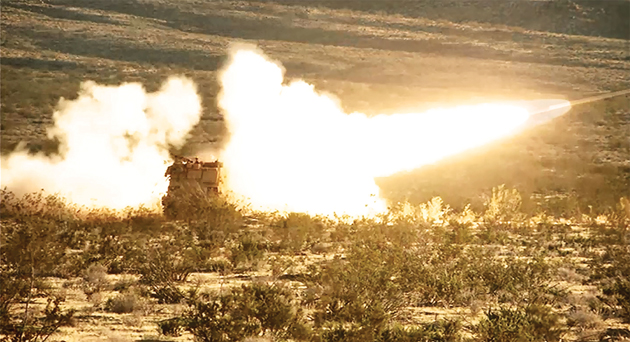 “This is an opportunity for our battalion level Tactical Operations Centers (TOC) to train in a distributed battlefield,” said Col. Nate Cook, Commander of 75th Field Artillery Brigade, “we have the opportunity now to stand the TOCs up from long distances and validate that we can do it from distances such as Oklahoma to California. We need to do that because it’s not unrealistic that we would fight that way, we’re currently fighting that way in the Middle East.”

Conducting operations in a distributed battlefield is revolutionizing training and hosting it at the National Training Center is crucial to validate the battalion’s ability to execute fire missions over large distances. Though the battalion conducted several fire missions during their readiness training, there wasn’t a lack of challenges.

“It was a little challenging from the get go. We haven’t trained on HF (High Frequency) a whole lot, especially at this distance,” said 1st Sgt. Max Creel, 2-20th Field Artillery Regiment, “Getting the antennas pointed in the right direction, realizing what frequency sets to use and working through software kinks in the radios was a little bit of a headache, but not something we couldn’t overcome.”

“We can train our battalions at Fort Sill to a certain degree, but we can’t replicate that division headquarters, the brigade combat team operations, as well as that world-class opposing force anywhere close to what is done at the National Training Center,” said Cook.