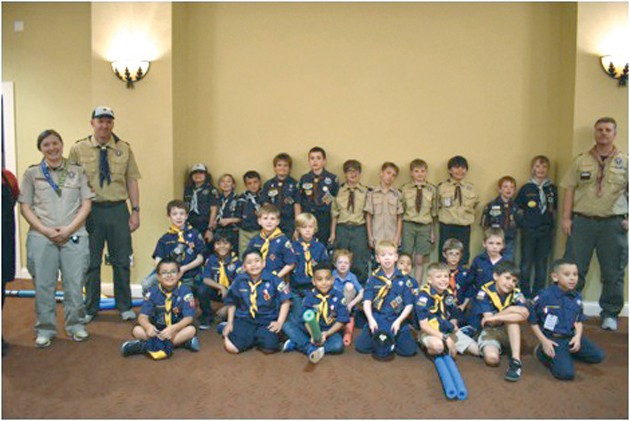 FORT IRWIN, Calif. — Tables covered with blue and gold decorations, pool noodles transformed into Star Wars sabers, and children of all ages joyously ran around the Sandy Basin Community Center in celebration to mark the end of another scouting year for Pack 67 on March 14.

Moderator for the evening, Cub Master Richard Lewis of Pack 67, stood amongst a room full of family members assembled to honor the 53 Cub Scouts who would be advancing to their next rank.  Part of advancement, for this pack, is having the scout held upside down, by a parental guardian, and the pin is placed on the lapel of the scout’s shirt.  By doing this, the pin will remain upside down until the scout completes a good deed.  Once the deed is complete, he will turn the pin right side up, marking the beginning of his progress for the next rank.

One Webelo from the pack had the honor of advancing to an Arrow of Light rank.  The ceremony included lighting of the candles and reciting the Scout’s oath.  This journey is significant to cub scouts because it is the final rank before Boys Scouts.  It is said, much of the experience gives the Cub Scouts the chance to practice skills that prepare them to become Boy Scouts.

The Boy Scouts of America began in 1910 and Cub Scouting began 20 years later.  The Blue and Gold banquet is the most exciting event on the Cub Scout calendar. It is the birthday celebration of Cub Scouting. Every family in the Pack can take part in its planning and execution.  The BLUE AND GOLD gets its name from the Cub Scout colors — blue and gold.  The purpose of the blue and gold banquet is to celebrate the pack’s anniversary, thank pack leaders and other adults who have helped the pack, and inspire the leaders, Scouts, and parents.

Lewis explained, “It allows them to receive their rank.”  When asked what Pack 67 will be doing over the next few months, he stated, “they have a trip with the pack to San Diego Zoo, an overnight camp in May to end out the Scouting year and then they will start summer camp.”

Over the summer there is a big transition with Pack 67 as families move away and new families move to Fort Irwin.  The Pack is always looking for new members and leaders to keep the Cub Scouting traditions moving forward.  For more information about Pack 67, visit
www.facebook.com/FortIrwinCubScoutPack67/

April 15 is around the corner