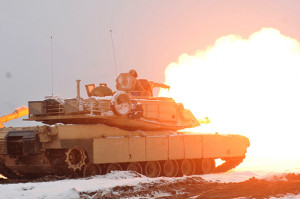 War fighters are best supported by giving them what they need to fight in a timely manner, said Maj. Gen. James E. Simpson.

To accomplish that takes teamwork from all the contracting organizations as well as the customers, those who write the requirements and industry, he said.

Culture change needed
Collaboration and communication are critical to efficient contracting, he said, and that requires a culture change. “None of us can do it by ourselves. It’s a partnership.”

In the past, those involved in contracting “waited for requirements to come to us,” he said. “We’ve got to reach out to the requirements activities and involve them early and up front … in order to anticipate those requirements.”

Good requirements are key to getting good contracts, he continued. “Poorly written, incomplete or late requirements directly affect our ability to execute contracts in a timely manner. We can’t play ping-pong back and forth on that.”

One way to ensure good requirements, he said, is by having discussions with industry early on, taking a look at what’s available and what’s possible. It’s important to be transparent.

Industry should be involved in the process as much as possible throughout the entire process, he added, noting that protests are increasing in recent years and this results in taking time and resources away from government as well as industry.

Protests sometimes occur when a losing industry challenges the Army’s decision on awarding a contract to a competitor.

“My biggest challenge now is hiring, training and retaining the contracting workforce,” he said. At one time, workers would stick around for 30 years and learn the ropes. Now, it’s about 10, he said.

At one time, workers would transfer from ACC Warren, Michigan, to ACC Picatinny Arsenal, N.J., he continued. Now, they’re transferring from Army to Air Force or the other way around, and that adds to the training curve.

Also, finding the right talent is challenging, he said. ACC is looking for people who have great writing and negotiating skills and who are willing to understand the total acquisition process, even outside their own lane.

Contracting itself is complex and takes time to understand, he said. Understanding the big picture is a much greater challenge that probably can’t be done during normal working hours. “You have to burn the midnight oil to understand this complex business.”

Simpson said he’s been in contracting since 1992 and understands the importance of what it does for readiness. “We can’t do anything without contracting and contracting support.”

Another perspective
Marie Greening, chief operations officer, Defense Contract Management Agency, or DCMA, said source selections often takes 18 months, a process that needs to be streamlined. She agreed with every recommendation Simpson made for getting that done.

DCMA works directly with defense suppliers to help ensure supplies and services are delivered on time, at projected cost, and that they meet all performance requirements, according to its mission statement.

“We are the independent eyes and ears of defense, from factory to front line, in locations around the globe,” she said.

“This is truly a team sport,” she said. Bringing industry in early and throughout the process is key.

She added that, in order to have more cost-effective contracting, the Army needs predictable funding from Congress, not a series of continuing resolutions.