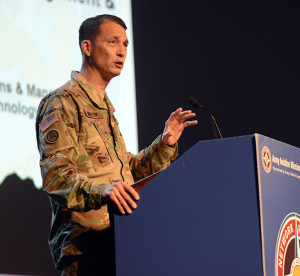 Maj. Gen. Robert Marion, who serves as the military deputy for the Assistant Secretary of the Army for Acquisition, Logistics and Technology, spoke at the 2017 Army Aviation Mission Solutions Summit, April 27, in Nashville, Tenn.

The Army must move past incremental modernization to existing systems and make the leap forward to new capabilities if it wants to maintain overmatch against adversaries, said Maj. Gen. Robert Marion.

“Across the Army and over the last 15 years, we have continued to modernize capabilities and have done so incrementally, with great results,” Marion said. “I believe we are at a nexus in time, technology and treasure that requires us to move beyond incremental modernization and in some key areas, focus on leap-ahead capabilities.”

Marion, who serves as the military deputy for the assistant secretary of the Army for Acquisition, Logistics and Technology, offered this assessment while speaking at the 2017 Army Aviation Mission Solutions Summit, sponsored by the Army Aviation Association of America, April 26-28 in Nashville, Tenn.

Marion said while at war for 15-plus years in Iraq and Afghanistan, adversaries have watched the United States, how it fights, and the capabilities that it has. And those same adversaries have also been developing their own technology.

“Our adversaries have watched us, they have learned our strengths, our vulnerabilities, they have seen our tactics, techniques, and procedures, and they understand how we operate,” Marion said. “In order to remain decisive against an elusive and increasingly capable enemy, we cannot wait to develop new capabilities, or we risk being too late.”

While continued modernization of existing capabilities, like the Bradley fighting vehicle, Abrams tank, Patriot missile system, AH-64 Apache, and UH-60 Black Hawk continue to be important, he said — and those systems will be valuable to the Army for years, if not decades to come — development and investment in new systems and new capabilities must start now.

“It’s time to look ahead to the next leap-ahead capability, and that’s Future Vertical Lift and the joint multi-role technical demonstration that will inform the requirements for FVL,” Marion said.

The FVL capability is expected to include an array of helicopters that share similar sensors, avionics and engines, for instance, but that perform a variety of different roles that will allow them to replace a range of older, existing Army helicopters.

“Our Army and our Soldiers need all of us, throughout this entire enterprise, and throughout the entire supply chain, to be at our absolute best as we execute the Joint Multi-Role Technical Demonstration, and as we prepare to execute the FVL program,” Marion said.”

Forward movement on FVL, as well as on other modernization programs, Marion said, has been stymied by a series of unpredictable budgets. At the start of April, for instance, a budget for fiscal year 2017 had still not passed. Under a “continuing resolution,” which allows the government to continue to be funded with dollars equivalent to what it received in the last passed budget, “new start” programs cannot begin. That makes it hard for the Army to modernize.

Marion also said about 80 Army programs will need to be maintained at fiscal year 2016 funding levels. One of those programs is the Improved Turbine Engine Program, which is meant to provide a new engine to the Apache and Black Hawk fleet.

“We awarded two contracts in 2016 for competitive technology maturation and risk reduction phases, and both of those vendors developed schedules and are executing to that program,” Marion said, saying those vendors’ work in 2017 is constrained to 2016 budget levels. “Both those vendors, this week, will stop. Because they will exceed their 2016 funding levels.

Marion emphasized that for the Army, and for Army aviation, “sustained, long-term and predictable funding is essential … to maintain current readiness and build a modern capable future force.”