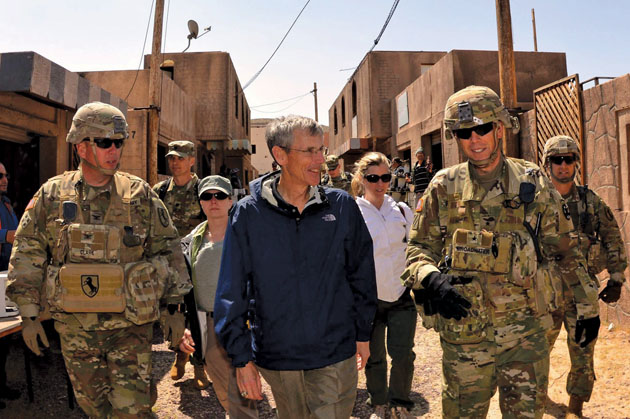 The Army’s top civilian began his visit at the National Urban Warfare Center (NUWC) located at Razish, where he witnessed the manipulation of the sights, sounds and smells within the town to mimic the conditions of a combat environment.

After Speer and others had moved to an observation point within the town, an improvised explosive device was detonated, triggering a fierce fight between the 11th Armored Cavalry Regiment and a replicated guerrilla force.

After the dust had settled, Speer engaged in one-on-one discussions with Soldiers of the 11th Armored Cavalry Regiment and distributed challenge coins. He then took a flight across the 1,200 square miles of austere terrain and toured infrastructure and live-fire training grounds.

“It was extremely important for the acting Secretary of the Army to get a firsthand knowledge of what takes place out here,” said Brig. Gen. Jeff Broadwater, National Training Center commander. “Just a great opportunity for him to see how we make training units better … [and also] the unique community of Fort Irwin.”

“It was a great opportunity for the acting Secretary of the Army to see up close and personal requirements needed to sustain training readiness for an armored brigade combat team,” said Col. Phil Brooks, commander of the 1st ABCT, 3rd Infantry Division.

“The complexities at the National Training Center challenge our formations and leaders to ensure we are more than prepared, if and when [we’re] required to answer our nation’s call,” he added.

Later, Speer hosted a round-robin discussion, during which commanders of each observer controller team with Operations Group asked questions and raised concerns about the budget, personnel, and Objective-T, the Army’s uniform readiness evaluation system.

“It was important for me to hear all of your questions, and I appreciate the earnest and open discussions,” Speer said. “It shows that you are very well connected to the Soldiers and what’s going on.”

“Readiness is No. 1,” he continued. “If we have to go to war, we will respond immediately, and it has to be a ready unit. So what you’re doing here is imperative.”

NCOs: Tune in to talk leader development during ‘Town Hall 2’