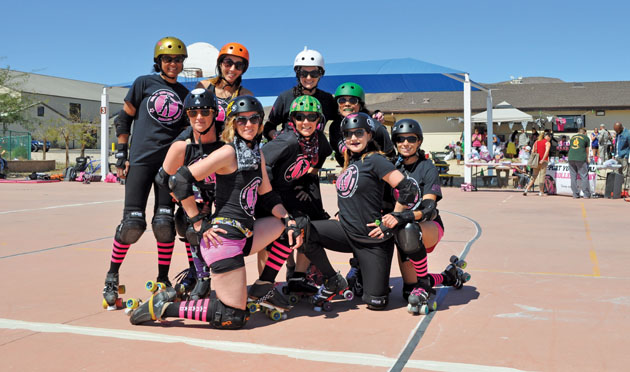 The crash and bash of the Heavy Arm-Her Roller Derby (HARD) Team could be heard for miles, during the third-annual Skate-a-Thon held April 1 at the basketball court near the skate park on Fort Irwin.

“Our annual Skate-a-Thon is the only fundraiser we put on all year,” said Molly Shaughnessy, who goes by derby name “Mauly Mudblood,” president of the team. “We invite friends and family to the free event to enjoy free food (donated by USO), games, bounce house, bake sale, silent auction and so much more.”

Funds raised during the event will go to cover team expenses including insurance, equipment and equipment maintenance, and travel expenses. “Our goal is to raise $9,000,” said Shaughnessy, who went on to say she was encouraged by the large community turn-out and was hopeful they would reach their goal. Individual skaters were also raising money, through a per-lap donation, to help cover their own expenses.

A portion of the profits raised during the event also went to a $500 scholarship, which is awarded annually to a Silver Valley High School student who is affiliated with the military. This year’s winner was Cora Mitchell, who wrote an essay describing a strong woman in her life.

The Roller Derby team is open to all women and promotes strength, both individually and as a team. “The greatest thing about derby is that there is no one size, one shape, one strength. Derby accepts and needs women of all different physical attributes and from all walks of life,” said Melissa Okpokwasili, who goes by derby name “Bang Bang” and served as president of the team last year. “Derby is about inner strength that naturally comes out of each individual when she sees her potential, she achieves personal goals and she has her teammates helping to push past boundaries,” said Okpokwasili.

This year marks the first that the team is participating in bouts with teams from around the southern California area. The first bout was held April 29 against the Dirt City Roller Rats, at Holiday Skate in Victorville, California. The Ft. Irwin Roller Derby team resoundingly beat the Victorville team with a score of 215 to 154. The first home bout will be held May 13 at the basketball court near the skate park, at 6:00 p.m., tickets are $5 each, children five and under are free.

Beth Kernaghan, who has been a part of the roller derby team for over two years and goes by derby name “Killer Bee,” spoke of the many changes the team has seen over the years, from continuously changing members do to moving to changing practice locations. “This is the first year of bouting as a competitive team. I never thought it was possible with all the turnover,” said Kernaghan. “It’s been an amazing journey to where we are now.”

“As a team, we are constantly trying to be part of the community as volunteers and a positive presence,” said Shaughnessy. The team attends and volunteers at many events, including recently volunteering at the Vietnam Veterans 50th Anniversary Commemoration held February 11 at Fort Irwin.

“It’s so important to be surrounded by positive people and progressive energy when located at a post so isolated as Fort Irwin,” said Shaughnessy. “We are trying to do our part to make Fort Irwin as welcoming as possible.”

“Roller Derby is a female-driven sport,” said Shaughnessy. “We welcome any female over age 18, no matter the skill level, to join us and learn how to play Roller Derby.”

The HARD team currently practices on the basketball court next to the skate park. To learn more about the team, visit https://www.facebook.com/Heavy-ArmHER-Roller-Derby-222416727770935/ or email 1hardpresident@gmail.com.