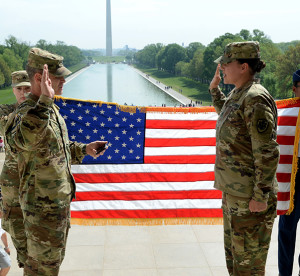 Sgt. Audrey L. Santana (right) re-enlists April 21 on the steps of the Lincoln Memorial. Administering the oath of enlistment is Col. Bernard Koelsch, deputy director of Defense Media Activity. Many Soldiers who re-enlist this year are eligible for considerable bonuses spelled out in a MILPER message released May 10.

Active-duty Soldiers have a two-week decision window from May 10 to May 23 to apply for the Selective Retention Bonus Program, which has some new sweeteners added as a way to entice those now on active duty to continue serving.

For some Soldiers, re-enlistment during the two-week period will mean lump-sum bonuses — extra money to spend over the summer months, perhaps. For others, depending on their military occupational specialty, it might be better to wait until the two-week window closes, said Sgt. Maj. Mark A. Thompson, who serves as the senior Army career counselor with Army G-1.

Wait, or grab it now?
Human Resources Command released Military Personnel Message 17-153 “Selective Retention Bonus Program,” May 10. The new message describes in detail the latest plans to encourage Soldiers to stay in the Army through the use of re-enlistment bonuses.

According to the message, 22 MOSs will be removed from the SRB list, with the 11B infantryman, skill level one, being the largest group affected. Thompson said Soldiers serving in those 22 MOSs should take the bonus offed by the Army now, because after the two-week window closes, they will no longer be qualified to receive it.

On the other hand, 35 MOSs have been added to the SRB list. However, those Soldiers will need to wait two weeks in order to take advantage of the bonuses, he said.

The great news is that the $13,000 “kicker” for Soldiers with a fiscal year 2017 expiration of term of service remains for all of the bonuses listed in the MILPER, he said, explaining that a kicker is money in addition to the bonus.

For example, an 11B specialist who goes for the SRB within the two-week window would be eligible for both a Tier 3 bonus of $3,000 for a three-year re-enlistment, as well as a $13,000 kicker. The $16,000 would be delivered in a lump sum, or all at once, to the Soldier, Thompson said.

Thompson urged eligible Soldiers to read the MILPER message to determine what changes affect them and to see their servicing career counselors as well, posthaste.

Other enhancements
Three important and improved developments have been added to the retention plan spelled out in the MILPER, Thompson said.

First, the bonus chart has been formatted in a new way, he said. In past messages, there have been two tables. Now, there is just one. The change, he said, is designed to make it easier for Soldiers to understand what they may or may not be qualified for when it comes to incentives.

Second, there’s a chance for Soldiers to get incentive pay for reclassifying into a critically-short MOS and going to a specific location, he said.

For example, say a Soldier is currently assigned to Fort Hood, Texas, as a 15B aircraft power plant repairer. He or she is airborne qualified but not in an airborne unit. That Soldier can receive incentive money to change MOSs and be assigned to an airborne unit, which most likely would be Fort Bragg, North Carolina, but could also be Fort Carson, Colorado, or a couple of other locations, Thompson said.

That Soldier would get the incentive money once he or she graduates from advanced individual training and is assigned to an airborne position, he said.

The third improvement is that all Soldiers who re-enlist will see an increase in the amount of stabilization, Thompson said. Previously, Soldiers re-enlisting for at least three years would get 12 months’ stabilization. Under the new policy, any Soldier with an FY17 ETS can re-enlist and get up to 36 months stabilization, depending on how many years they re-enlist.

Thompson said that Soldiers and families around the force have told the sergeant major of the Army that increased stabilization is something they wanted.

Good news for those not SRB eligible
Active-duty Soldiers not eligible for an SRB can still get something from the fiscal year 2017 ETS fund, Thompson said, listing the amounts:

Thompson explained that the ETS fund is something that has never been done before. The genesis of the ETS fund came out of the National Defense Authorization Act of 2017, signed Dec. 27, which mandated an end-strength increase of the active component of the Army to 476,000, which is an increase of 16,000 Soldiers.

The ETS fund is designed to retain more Soldiers to get to that increase by the end of FY17, he said. Increased accessions is the other spigot to get to that number.

Thompson said bonuses, incentives and other details spelled out in the MILPER boil down to shaping a ready force with the right skills in the right locations at the right time.