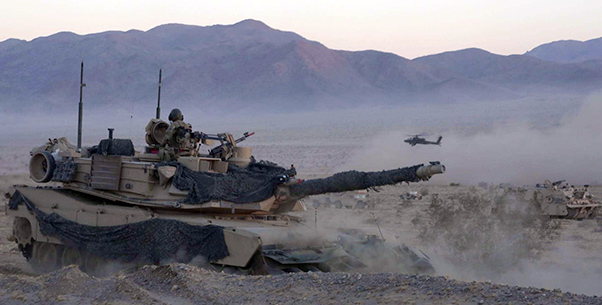 When a commander needs a capability, there’s an expectation that the contractor “is going to come trained to be able to execute that mission and step up immediately, just like it’s a tank company or some other entity that can hit the ground running,” said Jay T. Carr. Carr, executive director for Army Contracting Command at Rock Island Arsenal, Illinois, and others, spoke at the Association of the United States Army’s Institute of Land Warfare Hot Topic: “Army Contracts,” April 26, 2017. Shown here, Soldiers of 3rd Brigade Combat Team, 4th Infantry Division, provide security during Decisive Action Rotation 16-09 at the National Training Center in Fort Irwin, Calif., Sept. 6, 2016.

When a commander needs a capability, there’s an expectation that the contractor hired to provide that capability “is going to come trained to be able to execute that mission and step up immediately, just like it’s a tank company or some other entity that can hit the ground running,” said Jay T. Carr.

Carr serves as executive director for Army Contracting Command, or ACC, at Rock Island Arsenal, Ill. He manages about $80 billion in contracts for the Army each year. He spoke last month during an Association of the United States Army-sponsored forum on contracting.

While contractors must be experts in the duties they are hired to perform, contracting officers who manage those contracts cannot be expected to be complete experts at the product their contractors are delivering, Carr said. But those same officers do need to understand the requirements well enough to communicate them back and forth between industry and the military customer.

In order to be effective, contractors need to be encouraged to engage with the government early in the planning process and throughout the cycle of the contract, he said.

Commanders on the ground are not trained in writing requirements, Carr said. So it is up to those in ACC to help them articulate their requirements. There’s room for improvement in that area, he added.

“We have a vested interest … to do everything we can do to get to that end state so it’s one less thing commanders have to worry about on the battlefield,” he said.

Maj. Gen. James E. Simpson, commander of ACC, said “contracting is a complex field and getting stuff quicker to Soldiers takes a culture change from all of us, especially ACC.

“We have to work a year or two out to develop the requirements and that takes an integrated team of the engineers, contracting officers, program managers, the legal team and so on, meeting weekly or monthly to get the contracting package together and then get good solicitations, industry bids and good requirements.”

Simpson said that bad requirements result in expensive modifications and lengthy delays. It’s the Soldiers on the ground and the taxpayers who pay the price for that.

In developing requirements packages there are a lot of templates out there that can be useful to the customer, he said. “We have to make sure the customer knows where they’re at and help them understand how each one can fit what they’re trying to do,” he said.

Simpson also said personnel at ACC are working to improve accountability for the contracts they are responsible for. Accountability on a contract might mean ensuring that new contracts for services are in place well before old contracts expire. For example, if it’s known that a grass cutting contract on Fort Belvoir, Virginia, will expire on Dec. 1, 2018, the contracting officer needs to be working a year out to have the follow-on contract awarded in time so there is no lapse in service.

“Get stuff in early,” Simpson said “This is about doing what’s best for our Army. It’s what we should all strive for.”